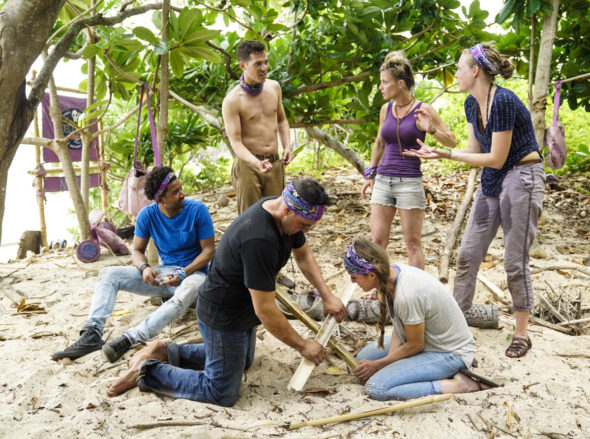 Does Jeff Probst still have a job? Is the Survivor TV show cancelled or renewed for a 37th season on CBS? The television vulture is watching all the latest TV cancellation and renewal news, so this page is the place to track the status of Survivor, season 37. Bookmark it, or subscribe for the latest updates. Remember, the television vulture is watching your shows. Are you?

A CBS competitive reality TV series, Survivor is hosted by Jeff Probst. Season 36, Survivor: Ghost Island, splits the 20 new castaways into two groups of 10. The action centers on bad decisions of past players. The new contestants can be dispatched to a separate haunted island the networks says is, “…filled with Survivor relics from the previous 35 seasons of the show.” Ghost Island contains idols and advantages from past locations including Brazil, China, Africa, and Australia. Now, the new players have to struggle to reverse the curses their forerunners faced.

The 36th season of Survivor is averaging a 1.56 rating in the 18-49 demographic and 7.78 million viewers. Compared to season 34 (Spring 2017, Game Changers), that’s down by 9% in the demo and down by 2% in viewers. Find out how Survivor stacks up against the other CBS TV shows.

Will CBS cancel or renew Survivor for season 37? Even though the ratings have dropped over the years, I don’t think we’ll ever see a surprise cancellation of this King of the Reality TV Shows (unless there is some scandal). Once the ratings approach a level the network won’t tolerate, if format tweaks don’t work, they’ll decide to retire it for a while, and promote the “final season” within an inch of its life. Until that time, I’ll seek supper somewhere else, keep a hungry eye on the Nielsens and update this page with breaking developments. Subscribe for free Survivor cancellation or renewal alerts.

What do you think? Are you glad that CBS has renewed its Survivor TV show for season 37? How many more seasons do you think this TV series has in it?