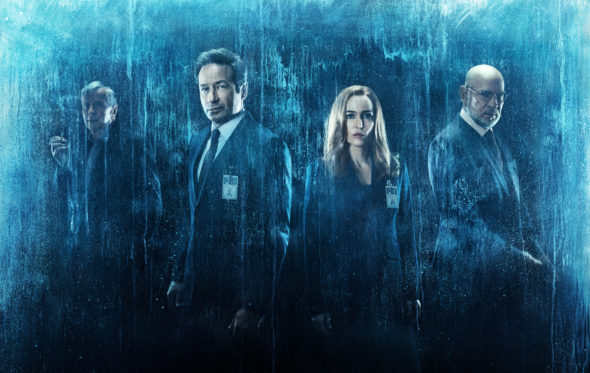 If the truth is out there, what is it? Has The X-Files TV show been cancelled or renewed for a 12th season on FOX? The television vulture is watching for the latest cancellation and renewal news, so this page is the place to track the status of The X-Files, season 12. Bookmark it, or subscribe for the latest updates. Remember, the television vulture is watching your shows. Are you?

The ratings are low and Anderson has said that she won’t be back if FOX orders a 12th season. While this could change, I’m thinking there won’t be another season.  I’ll keep an eye trained on the trades and will update this page with breaking developments. Subscribe for free alerts on The X-Files cancellation or renewal news.

What do you think? Do you hope that The X-Files TV show will be renewed for a 12th season at some point?

Please come out with a season 12 of the Xfiles. With or without Scully. I definitely feel the X files has a lot of life left in it and people are becoming more and more interested in the UFO sightings around the world and with the paranormal activity around the globe. The interest in of an All TIME HIGH RIGHT NOW. PLEASE KEEP IT ÇOMING BACK. LUV LUV LUV THE X FILES

I have always loved x files. Please keep it going, but I hope season 12s story lines are better. The connection between Mulder & Scully is what makes it click whether it be friends or lovers……it’s them together. Neither one would make it alone…..I hope the son is brought to light.

Keep it going…. I’m a big dork… I love the show.. I watch all the re-runs all the time on Hulu…Screw fox network.. Go to tbs or tnt… Bring back Doggit if you have too.. Shop other networks… Screw all you haters out there… I’ll watch it even if it sucks..

I really hope there is another season, at least to wrap it up…..the ending here is just wrong….I felt like I was watching reality that has been hidden and is now being disclosed….from the AI’s to the drinking of blood to stay young, and so much more, I was looking forward to seeing more disclosed….

fox’ decision is ******* disgusting,it’s such a shame they cancelled the only one serie which tells about paranormal in a serious and rialable way

We were hard pressed to find the shows as their times / dates seemed to get shuffled around a lot. Hope Season 11 gets on Netflix or Hulu so we can finally watch them as we both love the series (from day 1).

Personally…I love the xfiles, I always have. Even the knew episodes were awesome. But, I respect Ms. Anderson desicion to walk away. The xfiles does not work without Mulder and scully…period. I do however think that they should at least wrap it up and give fans who have watched for 20+ years closure. Maybe another movie wrapping things up, or a 2 part finale showing maybe them moving on with their life’s instead of leaving us with the chaos and destruction that the new season opened up. After such a long stretch of no episodes to comeback and leave the… Read more »

The X-Files can’t be cancelled. This is the most interesting and unique show that anyone can watch. You never know what to expect while watching each episode. They are so skillfully written and acted. If it is the end of The X-Files, thank you for making us think and creating stories that we will never forget!

This season’s episodes have been hit or miss but the raw talent is still there with many great stories still to tell, provided they maintain a strong writing staff. Let’s keep this alive!

Please don’t cancel my all time favorite show! I will be disappointed if it did. So please don’t close the x files!!!! Please!!!!!