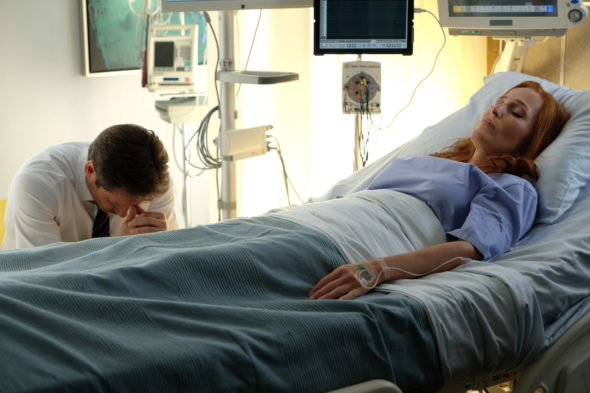 Mulder, I’ve seen it. I’ve seen how it begins… Below, check out the new “Hell on Earth” trailer for the 11th season of The X-Files TV show, coming to FOX in 2018. The truth still lies in the X-Files, or so Scully says, in this very “spooky Mulder” trailer. Watch the Cigarette Smoking Man (William B. Davis) make Walter Skinner (Mitch Pileggi) an offer that maybe he ought to refuse. The X-Files season 11 trailer was first released on Friday, at New York Comic-Con.

A sci-fi horror drama, The X-Files stars David Duchovny as Fox Mulder and Gillian Anderson as Dana Scully. The season 11 cast also includes Pileggi, Davis, Annabeth Gish, Robbie Amell, Lauren Ambrose, Barbara Hershey, and Brian Huskey. The X-Files first ran for nine seasons on FOX, between 1993 and 2002, and the franchise includes two feature films, as well. FOX revived it for a tenth season, which premiered in January of 2016 as a “limited event” series and renewed it for an 11th season, back in April of this year.

What do you think? Are you a fan of The X-Files TV show? What did you think of the official season 11 trailer? Do you plan to check out the new season when it debuts on FOX?

I’ve got mixed feelings about this. I was a fan and watched from the beginning in 1993. However when they brought Dogget and Reyes in I quit watching. The stories just weren’t that good anymore. Though this trailer intrigues me, so I may check it out.

I won’t be watching X-Files this season ,yet am, and always was, a huge fan. This time, however,after seeing the photo of the two main stars ‘taking the knee’, I am not going to be watching. Really, actors and anyone in the ‘entertainment’ business should stick to what they do best……acting, and telling stories. For this reason I am not watching Star Trek-Discovery…yet, have been a true Trekkie since the very first ‘Captain Kirk’ episodes…