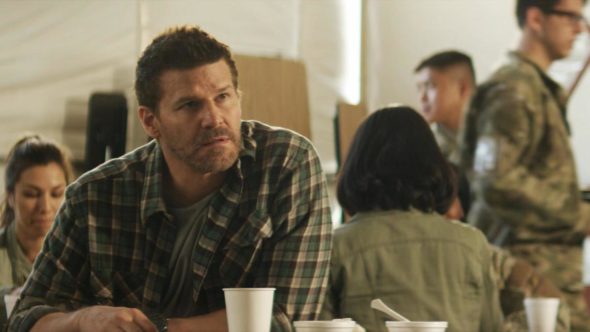 The Tiffany Network is sticking with David Boreanaz. CBS has renewed his SEAL Team TV show for a second season. The renewal was expected, as the military drama ranks among the top ten shows on the network.

A CBS TV series, SEAL Team stars Boreanaz, Max Thieriot, Neil Brown Jr., AJ Buckley, Toni Trucks, Jessica Paré, and Judd Lormand. The story centers on an exclusive Navy SEAL unit as they train for, plan, and risk their very lives to carry out perilous missions for the sake and honor of the U.S.A. Fierce and focused Jason Hayes (Boreanaz) leads the Tier One team. Despite the hardship it causes them and their families, this SEAL team is ready, willing, and able to embark upon secret missions at the drop of a hat. Their love of country and deep resolve is unmatched.

SEAL Team: A Look at the Ratings

The first season of SEAL Team is averaging a 1.09 rating in the 18-49 demographic and 7.15 million viewers. Find out how SEAL Team stacks up against the other CBS TV shows.

CBS has had some marked success with new TV series, this year. Today, the Tiffany Network also renewed its SWAT TV show reboot for a second season. The two series join Young Sheldon, which was previously renewed for season two. Check out the CBS press release, for more.

“These exciting new dramas have been sensational additions to our schedule, are striking all the right notes creatively, and really connect with our viewers,” said Kelly Kahl, President, CBS Entertainment. “SEAL TEAM has strengthened our Wednesday line up – routinely winning its time period with over 10 million viewers and allowing us to build an even more powerful night, while S.W.A.T. has improved Thursday’s 10:00 PM hour by over 2.5 million viewers versus last season. Additionally, both are among the very top streamers on our digital platforms, including CBS.com and CBS All Access. We congratulate the talented casts and producers on an amazing year as we look forward to their return next season.”

SEAL TEAM is a one-hour military drama starring David Boreanaz that follows the professional and personal lives of the most elite unit of Navy SEALs as they train, plan and execute the most dangerous missions that our country can ask of them. Benjamin Cavell, Ed Redlich, Christopher Chulack, Sarah Timberman and Carl Beverly serve as executive producers. SEAL TEAM is produced by CBS Television Studios.

What do you think? Have you been watching the SEAL Team TV series? Did you think CBS would cancel or renew it for season two?

Why did you leave SWAT n take off Seal Team

Seal Team is the only television show I watch every week and always waits with anticipation about the next episode. This is a top quality program. Hope it never ends.

Glad to hear Seal Team will be back. I don’t think I missed one episode of the first season. Since reading “Lone Survivor” I have had the greatest respect for these men.

I served in the USAF and really understand the real life of the SEAL teams. I have a good friend who was a Masterchief in the SEALs. I look forward to the straightforward and honorable way this series is being done. God bless the SEALs and all the US Special Forces who lay their lives on the line every day. I am looking forward to the next episodes. Please don’t cancel it.

Love the show! Please bring it back! Look forward to watching it every Wednesday night. Good combination of operations and family.

We really miss watching Seal Team. It’s one of the best show on TV and we love all the actors. Please bring back!

SEAL TEAM in my opinion is one of the best shows on television these days. WHY is it being cancelled? Great acting: authenticity, great dog: what’s not to like? Head and shoulders above anything else. Why is it that the quality shows seem to get cancelled?

Really good show with lots of action, and characters you can relate to. Majority of actors are well cast for their role. Really hope it comes back for Season 3.

Seal Team is a fantastic show! Have been watching for it on Wednesdays, and am disappointed each time I look! Is this season over already?? If so it had better be renewed for another season! Anxiously awaiting it’s return!!!

This is the best tv show ever I can’t believe CBS isn’t showing it. Why? Please bring it back. Love this show.