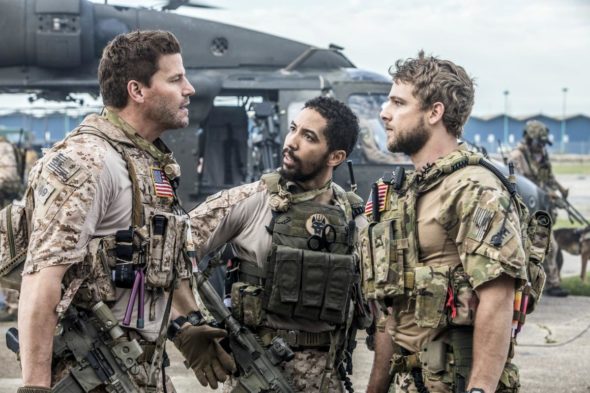 SEAL Team has a new leader. Deadline reports John Glenn has been named the new showrunner for season two of the CBS TV show.

The military drama centers on an exclusive Navy SEAL unit as they train for, plan, and risk their very lives to carry out perilous missions for the sake and honor of the U.S.A. The cast includes David Boreanaz, Max Thieriot, Neil Brown Jr., AJ Buckley, Toni Trucks, Jessica Paré, and Judd Lormand.

While John Glenn will serve as showrunner for season two of SEAL Team, two EPs will not be joining him. Both creator Benjamin Cavell and EP Ed Redlich are leaving the CBS series ahead of season two.

What do you think? Have you seen SEAL Team? Will you watch season two?

I enjoy this show and am glad to start watching the new season. Saw a comment from another old gal (I’m 76). We’ve been watching TV for awhile now, and know what’s good and what’s not.

As a Navy Veteran, I like Seal Team. Just keep in mind that this is REALLY a bunch of actors ACTING like their doing the REAL THING, however I love watching it and picking apart all the little idiosyncrasies in their plots/plays/performance & mannerisms that sometimes DO & DON’T reflect the real world of Seal Team Life & activities. The best way for these actors to reflect a more REALSTIC PERFORMANCE would be for them to go through a boot-camp training period along with REAL SEAL TEAM members and also FIREARM TRAINING. There are innumerable firearm safety movements that do… Read more »

Interestingly, Tyler Grey (Trent Sawyer) is a retired SO and Scott Foxx (Full Metal) and Mark Semos (consulting producer and stunt man on the show) are retired SEALs. This show probably employs the largest contingent of veterans in the industry.

I love seal team and have never missed a show and am 66 lady so us old gals still like adventure was not happy when they are off for worlds best can’t wait till this weds. I feel its like u are there more then any other show even Swat seams all staged stunts It is not only a show but gives us a reminder of all who have served God Bless All are troops.

Awesome show. Can’t wait for season three@ We bought the DVDs and watch them over and over!

GREAT show..i am glad it is coming back…

I love the show!! It’s showing as close to the real thing as it possibly can. It’s managed to assemble a crew that actually appears to work incredibly well as a team. The only thing I would suggest is focusing on all of them in action together as much as you can. It’s intense in the real environment, so you have to keep it as intense as you are. The in real world sometimes a mission goes horribly wrong in field and at home. The effects take a lot out of every team. Each member of the team processes it… Read more »

I love the show, can’t wait for season 2!

Husband and I record “Seal Team” and watch it regularly. My husband grew up as a “military brat,” and we have much respect for the military and it’s role in protecting our country. Keep creating plots with lots of action and suspense and folks will keep watching!

Me and the wife just love watching Seal team. It tells the story of our special ops. teams doing what they do in helping preserve our freedom. Hammer hits the nail on the head in this action pack series and were are ready to watch season 2 of Seal Team and Swat. Thanks CBS for what you provide in entertainment!! Well done!!

I love the show, I’m a big David Boreanaz fan. And I think the whole cast is great..

My wife and I luuuve this show!. Cannot wait for it to come on each week.