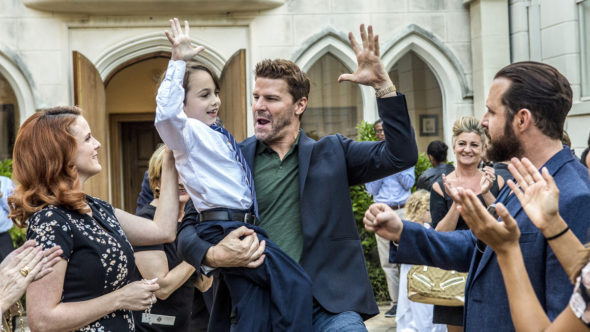 Does the Tier One team stay on mission in the first season of the SEAL Team TV show on CBS? As we all know, the Nielsen ratings typically play a big role in determining whether a TV show like SEAL Team is cancelled or renewed for season two. Unfortunately, most of us do not live in Nielsen households. Because many viewers feel frustrated that their viewing habits and opinions aren’t considered, we’d like to offer you the chance to rate all the season one episodes of SEAL Team for us here.

A CBS military drama, SEAL Team stars David Boreanaz, Max Thieriot, Neil Brown Jr., AJ Buckley, Toni Trucks, Jessica Paré, and Judd Lormand. The military action drama series centers on an exclusive Navy SEAL unit as they train for, plan, and risk their very lives to carry out perilous missions for the sake and honor of the U.S.A. Fierce and focused Jason Hayes (Boreanaz) leads the Tier One team. Despite the hardship it causes them and their families, this SEAL team is ready, willing, and able to embark upon secret missions at the drop of a hat. Their love of country and deep resolve is unmatched.

What do you think? Which season one episodes of the SEAL Team TV series do you rate as wonderful, terrible, or somewhere between? Should CBS cancel or renew SEAL Team  for a second season? Don’t forget to vote, and share your thoughts, below.

After being a David Boreanaz fan since Angel in Buffy the Vampire Slayer and then of course Bones, I was really looking forward to this new venture, and I’ve not been disappointed! Brilliant and hooked right from episode 1. Glad to hear its being renewed for a 2nd Season!! I’d never seen Max Thieriot, but I’m enjoying watching him too…. The dynamics are being set really well and the team are becoming familiar, which is important. The entire cast, pooch included, are brilliant.

Absolutely love this show, most of the time I record them th en watch them all in one night. Love David and the entire cast.

Loved David in Buffy and bones ,I hate this show

Seal Team is a GREAT MILITARY DRAMA. Don’t cancel this show.
Its a great way to show the general public that the War on Terror is still
very much alive and well and our only protection is the preemptive forces
and sophisticated intelligence for special forces such as our Seals.

SEAL TEAM IS THE BEST SHOW ON CBS PROGRAMING PERIOD…DON’T CANCEL THIS SHOW…I’LL QUIT MY VIEWERSHIP IF YOU DO.

Great show .. one of my favorite all time military shows.. hope it continues and doesn’t get cancelled.. keep it going pls.. can’t wait for the next season to start

Good show, but I liked the realism of the seal team based show that preceded it on TV. But I do want it to continue.

This is an Awesome show, I love how it depicts the characters military as well as personal lives. One of the best shows on TV right now given the way things are in the world today. Great TV !!!

This is military reality…they give their lives for us. This show Seal Team is outstanding. The actors seem to truly comprehend what military goes through in real life. Thank you for the production of this series of shows with regards to what a Seal Team actually does. 10 stars all around.. it’s an ACE!

WAS VERY DISAPPOINTED IN THE SHOW! DRY AND BORING! DAVID BOREANAZ IS A WONDERFUL ACTOR, AND SHOULD RENEW THE TV SHOW CALLED BONES