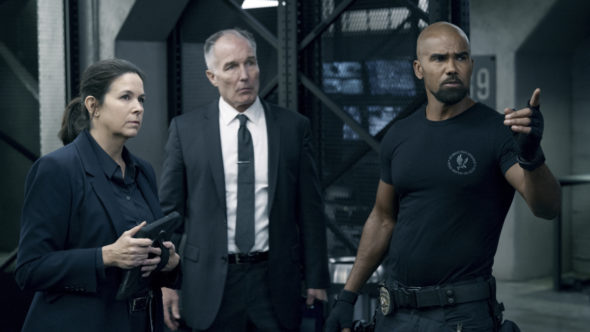 Hondo and his team will be back at work in the 2021-22 broadcast television season. CBS has renewed the SWAT TV series for a fifth year.

Airing on Wednesday nights, the fourth season of SWAT averages a 0.43 rating in the 18-49 demographic and 3.19 million viewers in the live+same day ratings. Compared to season three, that’s down by 25% in the demo and down by 21% in viewership. In the traditional ratings, the show ranks 20th out of this season’s 24 scripted CBS series.

What do you think? Have you enjoyed the SWAT TV show? Are you looking forward to watching the fifth season of this series on CBS?

I love watching SWAT. It covers so many of today’s issues besides crime. Keep it going please

Please keep SWAT no matter what! It is absolutely one of the best shows out there!! Feel like I’m part of the “Family” when I watch it soo hype for season 5!! Even more hype for season 6
P.s
Please let there be a season 6

Swat, Bluetooth Bloods, Seal Team, Clarence they all need to be back on

Swat, Blue bloods, All rise, Equalizer must come back those are some of the best shows of CBS let’s do it.

RENEW SEALTEAM ONE OF THE BEDT ON TV!!!

I absolutely love SWAT. Shamar Moore is a fantastic actor. He proves leadership & friendship can go hand in hand.

Compared to early seasons, season 4 was really bad and appeared to more concerned with being woke than being entertaining. No wonder they lost nearly 25% of their audience. Go woke go broke as they say. I for one will not be watching season 5.

Swat is one of my favorite T.V. Shows Shamar Moore is an excellent actor and character pics for the team complement the shows episodes !!!

You have renewed our FAVORITES…Blue Bloods, NCIS, BULL and SWAT. Please SEAL TEAM also. Thank you!!!!

Yes, it makes me very happy that they have renewed SWAT. It’s one of my favorite shows. I am also glad that they renewed Blue Bloods and Magnum PI. What makes me sad though is that they have cancelled MacGyver. It was a favorite of mine also.

I am very happy that NCIS and SWAT are being renewed. NCIS is my absolute favorite TV show, and I’m completely and appropriately thrilled it stays away from political and social issues effecting our country. I watch tv to take my mind off my worries, not add to them with a slant. SWAT, is usually very good about that also. However there have been 2 episodes I turned off. There is enough drama going on these days, without having to watch the channels’ writers and editors personal opinions on them. Plus, these shows are interesting, emotional and have great actors.… Read more »

We love this show, glad it is renewed for season 5. We are not into sifi or any of the super heros stuff. I like all the characters & their stories.

SEAL Team should have been renewed before SWAT!

I like both and want SEAL Team renewed also!