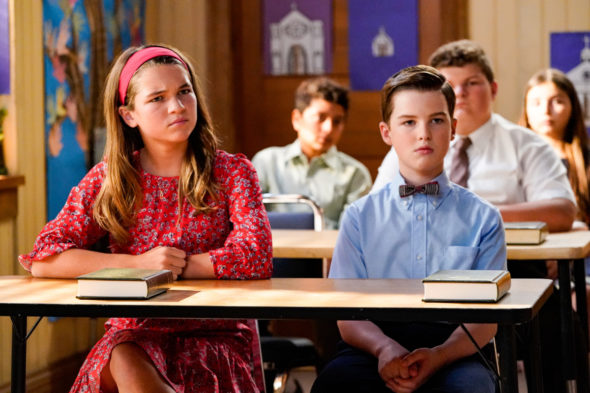 How will the pre-teen genius grow in the fifth season of the Young Sheldon TV show on CBS? As we all know, the Nielsen ratings typically play a big role in determining whether a TV show like Young Sheldon is cancelled or renewed for season six. Unfortunately, most of us do not live in Nielsen households. Because many viewers feel frustrated when their viewing habits and opinions aren’t considered, we invite you to rate all of the fifth season episodes of Young Sheldon here.

What do you think? Which season five episodes of the Young Sheldon TV series do you rate as wonderful, terrible, or somewhere between? Are you glad that Young Sheldon has already been renewed for a sixth season on CBS? Don’t forget to vote, and share your thoughts, below.

I’m throwing in with the POV that believes this show is actually getting better with age, like a fine wine! Good stories take time to tell, ( like Homer’s “Odessey”, the “Star Wars” saga, the “X-Men” saga, and so forth ) and the writing staff and producers have been aware of where they are going with this show since the show was in it’s preliminary, developmental stage. As for the audience who are unhappy with the upcoming adultery storylines, well, unfortunately, adultery is a regular part of life, especially in more rural areas like suburban Texas where people tend to… Read more »

I love the show. Especially Annie Potts. Just keep the story going more positive and not having babies at 18. I didn’t think Sheldon’s brother had a child when the big bang theory was on. Please keep the show going. The cast is great.

Not easy to come up with a prequel to a great character of The Big Bang. But, by Jove, I think you got it! Husband and I never miss it and watch all re-runs off season.

Soooh disappointed with the direction the show takes in Season Five. Hurts so much to see George Sr, betray the trusting Mary. Just don’t want to watch any further. Nothing funny about adultery, nothing funny about what it does to the spouse and children either. I wish they hadn’t tried to stay so true to BBT. Viewers of Young Sheldon would have been perfectly fine to have done without certain betrayals or the impending death of George, Sr. The problem is, a lot of viewers, like myself, really came to like George, Sr., in spite of his problems…it’s obvious he… Read more »

cancel this show. it is so bad

It used to be cute and amusing. This season is dreadful!! Story lines are WRONG! All the characters have become whiny and unpleasant. Please let this be the LAST season and try. to salvage some of the joy in the show!

I love this show! Please keep Young Sheldon on for a good many seasons to come.

The actors are so good. I love young Sheldon. It keeps getting better.

Used to be a funny family show, used to be.

I love this show and all the characters!

Love the show, So glad it came back again. Keep it coming.

Enjoy Young Sheldon. It is different and entertaining.

Why did they need to bring up infidelity?
Leave it fun, silly, family type show, like it used to be.

I agree. They could have left out the infidelity and merely hinted at problems and resolved them. Now, everything is ruined. There is nothing funloving about adultery. Why couldn’t they leave well enough alone. Now it’s too serious, too tedious, too HARD to watch.