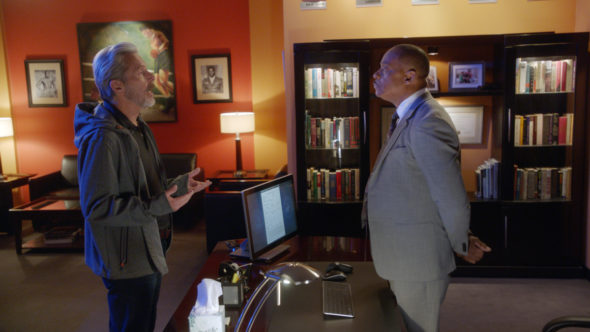 How will the team adjust to the changes in the 19th season of the NCIS TV show on CBS? As we all know, the Nielsen ratings typically play a big role in determining whether a TV show like NCIS is cancelled or renewed for season 20. Unfortunately, most of us do not live in Nielsen households. Because many viewers feel frustrated when their viewing habits and opinions aren’t considered, we invite you to rate all of the 19th season episodes of NCIS here.  *Status Update Below.

What do you think? Which season 19 episodes of the NCIS TV series do you rate as wonderful, terrible, or somewhere between? Do you think that NCIS should be cancelled or renewed for a 20th season on CBS? Don’t forget to vote, and share your thoughts, below.

My husband and I have watched NCIS since the very first episode. We have stuck with the show through the many changes that have come throughout the years. Now after watching this week’s episode (S19e17), it will be joining our growing list of shows that we will no longer watch. It is very sad for us to see the writers take this show down the road that so many shows these days have chosen to go. The good thing is, we have more free time to do more family oriented activities.

Ok. Ep14. Vance’s daughter assigned to his office and wants to be sure that she is safe as an agent. Huh? She is insistent and wants to be treated as an equal. She is captured and saved. Lame. We need Gibbs.

Please boost your ratings look forward forward to seeing it every Monday night crime drama. Never missed any episodes of it. Enjoy it and love it.

Please do not cancel NCIS . I have never missed an episode. Mark Harman…..can’t you do something to keep this show on TV (regular channels and not pay tv.?) I miss you on NCIS but I still look forward to watching it. Feb. 28 2022 episode was so touching. Ld 3/2/22.

Please keep NCIS on the air. DON’T cancel. Still one of the best shows on regular tv. Gary Cole is doing a great job since Mark Harmon left. Too many people want to compare the two but he brings a whole new perspective to the team. Again, please don’t cancel!

I think NCIS should be canceled…Gary Cole does a lousy job. The only way it should come back for season 20 is if Gibbs makes some appearances. It’s a totally different show with Cole. I have been watching NCIS since it’s beginning, but not anymore.

Please renew another season of NCIS. We never miss an episode.

I can live without Gibbs being on every week. I like the new team leader. But the knight character has got to go. She is a dreadful cliché and the writers should be ashamed. The show needs a strong woman, and she ain’t it. Too bad you killed off Director Shepherd and banished Živá and Tony to another life. (Bull sucked, btw. MW looked like an old man and his character — ugh!)

NCIS is a must-see in our house. Please do not cancel it. Even with the new characters it is still EXLNT.

Please do not cancel NCIS. Reruns are fine with me, when regular shows can’t be on.

Bring back Tony to fill in for Gibbs. Have Parker move to the FBI to replace Fornell. Bring Gibbs in for periodic cases or even as Director and move Vance to be Sec Nav or Sec of Def.