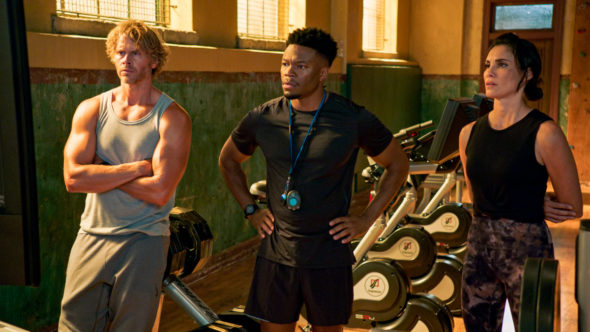 What new threats will the team encounter in the 13th season of the NCIS: Los Angeles TV show on CBS? As we all know, the Nielsen ratings typically play a big role in determining whether a TV show like NCIS: Los Angeles is cancelled or renewed for season 14. Unfortunately, most of us do not live in Nielsen households. Because many viewers feel frustrated when their viewing habits and opinions aren’t considered, we invite you to rate all of the 13th season episodes of NCIS: Los Angeles here.  *Status Update Below.

What do you think? Which season 13 episodes of the NCIS: Los Angeles TV series do you rate as wonderful, terrible, or somewhere between? Do you think that NCIS: Los Angeles should be cancelled or renewed for a 14th season on CBS? Don’t forget to vote, and share your thoughts, below.

I was waiting for this segment. Everyone but Hetty and Deeks were involved At long last Callen told Anna he loved her and she responded in kind. I felt sad at one point and seeing Joelle killing Kataya was great Kilbride helping the team. The acting was fantastic fooling me with is it real or not. Cant wait for next week

Enjoyed dual episodes of NCISLA. Hints to what Callen is up to and in the second story I thought it was Katya killing all. Would have liked more G but was happy to see Sabatino too.

Last evenings show was intriging. Fatamia has someone interested in her I like him and Roundtree, I like him too, doesn’t like it. G and Nate are working together I think Kenzi and Deekes have their child (but can’t understand why Deekes was looking forlorn) When is Callen going to tell Anna he loves her? He did not even kiss her when she told him she loves him. what is up with that strange guy with the plants what is he going to do with G. I think that girl is workikng w/him and they all work with Katya. Getting… Read more »