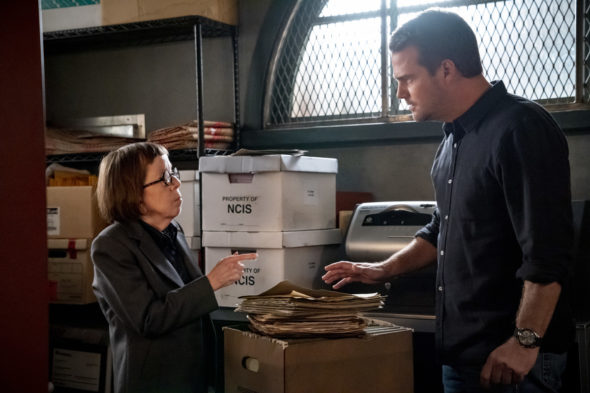 How long will the LA team stay in operation? Has the NCIS: Los Angeles TV show been cancelled or renewed for a 14th season on CBS? The television vulture is watching all the latest cancellation and renewal news, so this page is the place to track the status of NCIS: Los Angeles, season 14. Bookmark it, or subscribe for the latest updates. Remember, the television vulture is watching your shows. Are you?

The 13th season of NCIS: Los Angeles averages a 0.61 rating in the 18-49 demographic and 5.73 million viewers. Compared to season 12, that’s up by 2% in the demo and up by 1% in viewership in the live+same day ratings (including DVR playback through 3:00 AM). While these numbers don’t include further delayed or streaming viewing, they are a very good indicator of how a show is performing, especially when compared to others on the same channel. There can be other economic factors involved in a show’s fate, but typically the higher-rated series are renewed and the lower-rated ones are cancelled. Find out how NCIS: Los Angeles stacks up against other CBS TV shows.

Will CBS cancel or renew NCIS: Los Angeles for season 14? This show’s been around a long time but has continued to be a solid performer for the network. While nothing lasts forever, I don’t think this show is near the end of its run just yet. I think NCIS: Los Angeles will be renewed.  I’ll update this page with breaking developments. Subscribe for free alerts on NCIS: Los Angeles cancellation or renewal news.

What do you think? Do you hope that the NCIS: Los Angeles TV show will be renewed for a 14th season? How would you feel if CBS cancelled this TV series, instead?

Cancel it It is thee dumbest one on air

I hope they keep this show going! They cancelled New Orleans!