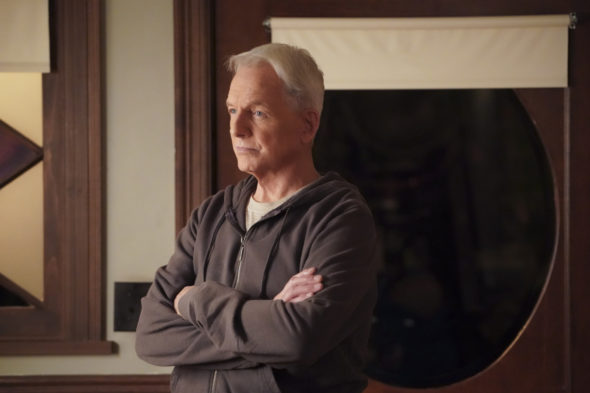 Can the show survive without Gibbs? Has the NCIS TV show been cancelled or renewed for a 20th season on CBS? The television vulture is watching all the latest cancellation and renewal news, so this page is the place to track the status of NCIS, season 20. Bookmark it, or subscribe for the latest updates. Remember, the television vulture is watching your shows. Are you?

The 19th season of NCIS averages a 0.57 rating in the 18-49 demographic and 7.32 million viewers. Compared to season 18, that’s down by 30% in the demo and down by 23% in viewership in the live+same day ratings (including DVR playback through 3:00 AM). While these numbers don’t include further delayed or streaming viewing, they are a very good indicator of how a show is performing, especially when compared to others on the same channel. There can be other economic factors involved in a show’s fate, but typically the higher-rated series are renewed and the lower-rated ones are cancelled. Find out how NCIS stacks up against other CBS TV shows.

Will CBS cancel or renew NCIS for season 20? Though the networking has moved this long-running show to a new night and Harmon has left (at least full-time), I think this series will continue to bring in respectable ratings and will likely be renewed. I’ll update this page with breaking developments. Subscribe for free alerts on NCIS cancellation or renewal news.

What do you think? Are you glad that the NCIS TV show has been renewed for a 20th season? How would you feel if CBS had cancelled this TV series, instead?

I only watch NCIS and Bull. If Weatherly replace Harmon then it is a great!

Have weatherly come back

Not interested in the Alden Parker arc. Bring back Tiva and Gibbs.
I only watch the episodes with Sasha and Cote in on a loop.

I really don’t care if Gibbs comes back or not !!!! I would LOVE to have Michael Weatherly and Cote De Pablo back permanently!! They’re what’s the glue that brings me to the show..

Renew the show its one of the best shows on tv

Please renew. It is still one of the best shows to watch although I don’t care for Gary Cole. Still missing Mark Harmon. Enjoy McGee and Palmer

NCIS is the only show I watch. I hope and pray it doesn’t get canceled. Gary Cole is a great actor and am hoping Mark Harmon returns occassionally (Everyone needs a break). I do watch Masterpiece on PBS so if NCIS is canceled will watch reruns and PBS.

Please do not cancel NCIS! It is the only show I watch. I would love to see some of the older cast come back, but if not it is still an awesome show!