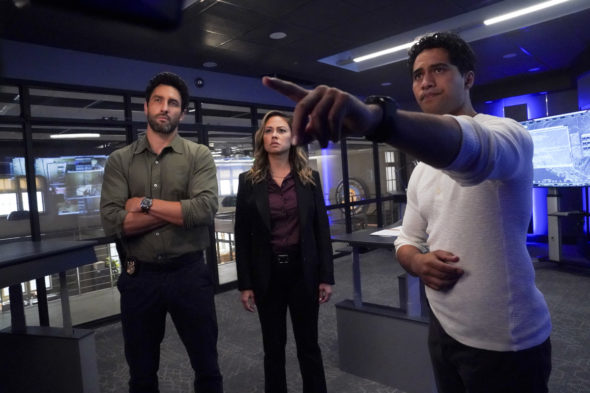 Will this newest entry to the NCIS franchise be a hit? Has the NCIS: Hawai’i TV show been cancelled or renewed for a second season on CBS? The television vulture is watching all the latest cancellation and renewal news, so this page is the place to track the status of NCIS: Hawai’i, season two. Bookmark it, or subscribe for the latest updates. Remember, the television vulture is watching your shows. Are you?

Airing on the CBS television network, the NCIS: Hawai’i TV series is the latest entry in the NCIS franchise and stars Vanessa Lachey, Yasmine Al-Bustami, Jason Antoon, Noah Mills, Tori Anderson, Kian Talan, and Alex Tarrant. Jane Tennant (Lachey) is the first female Special Agent in Charge of NCIS Pearl Harbor. She has thrived and risen through the ranks by equal parts confidence and strategy in a system that has pushed back on her every step of the way. Her unwavering team of specialists includes junior field agent Lucy Tara (Al-Bustami); cyber intelligence specialist Ernie Malik (Antoon); second-in-command Jesse Boone (Mills); Defense Intelligence Agency Special Agent Kate Whistler (Anderson); and Kai Holman (Tarrant), a new NCIS agent. Tennant and her team balance duty to family and country while investigating high-stakes crimes involving military personnel, national security, and the mysteries of the island paradise itself.

The first season of NCIS: Hawai’i averages a 0.52 rating in the 18-49 demographic and 5.48 million viewers in the live+same day ratings (including DVR playback through 3:00 AM). While these numbers don’t include further delayed or streaming viewing, they are a very good indicator of how a show is performing, especially when compared to others on the same channel. There can be other economic factors involved in a show’s fate, but typically the higher-rated series are renewed and the lower-rated ones are cancelled. Find out how NCIS: Hawai’i stacks up against other CBS TV shows.

Will CBS cancel or renew NCIS: Hawai’i for season two? This show is the latest entry in the NCIS franchise and is filmed in the Aloha State, alongside the network’s Magnum PI reboot. CBS no doubt is looking to replace some of its older drama series and this one would seem to fit in well with the rest of the shows on the network schedule. Though it had a pretty soft debut, I think NCIS: Hawai’i still has a very good chance of being renewed. I’ll update this page with breaking developments. Subscribe for free alerts on NCIS: Hawai’i cancellation or renewal news.

What do you think? Are you glad that the NCIS: Hawai’i TV show has been renewed for a second season? How would you feel if CBS had cancelled this TV series, instead?