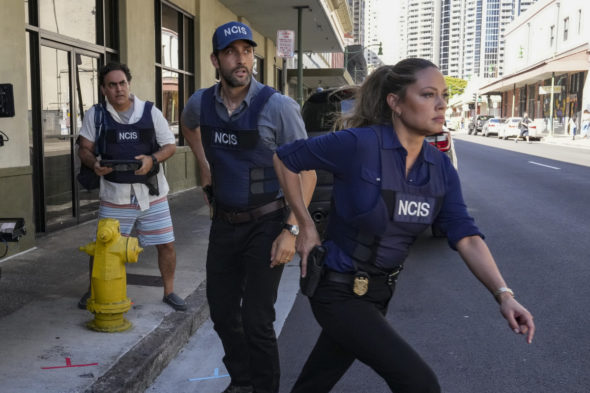 Tennant and her team are staying on the case for the 2022-23 season. CBS has renewed the NCIS: Hawai’i TV series for a second season. The first season currently airs on Monday nights and the finale is set to run on May 23rd.

A procedural drama, the NCIS: Hawai’i TV series is the latest entry in the NCIS franchise and stars Vanessa Lachey, Yasmine Al-Bustami, Jason Antoon, Noah Mills, Tori Anderson, Kian Talan, and Alex Tarrant. Jane Tennant (Lachey) is the first female Special Agent in Charge of NCIS Pearl Harbor. She has thrived and risen through the ranks by equal parts confidence and strategy in a system that has pushed back on her every step of the way. Her unwavering team of specialists includes junior field agent Lucy Tara (Al-Bustami); cyber intelligence specialist Ernie Malik (Antoon); second-in-command Jesse Boone (Mills); Defense Intelligence Agency Special Agent Kate Whistler (Anderson); and Kai Holman (Tarrant), a new NCIS agent. Tennant and her team balance duty to family and country while investigating high-stakes crimes involving military personnel, national security, and the mysteries of the island paradise itself.

Check out our CBS status sheet to track the Tiffany network’s new series pickups, renewals, and cancellations. You can find lists of cancelled shows here.
What do you think? Have you been watching the NCIS: Hawai’i TV show on CBS? Are you glad to hear that this procedural drama has been renewed for a second season?

Sorry Scenery is beautiful in Hawaii but Vanessa Lachey is so boring no personality. Episode with Katrina Law and Wilmer (Torres) in it so boring where are the personalities in this show

I’m very happy and excited that NCIS Hawaii will have another season. Love the action and the interaction of all the actors in the show. I’m hopeful that Lucy and Kate will be ok.

I am so very happy that they have renewed NCIS: Hawaii! I love the actors in it and the show itself is just as good as Hawaii Five 0 was! I really hated it when they cancelled that show!

I’m so happy that they renewal NCIS: Hawaii