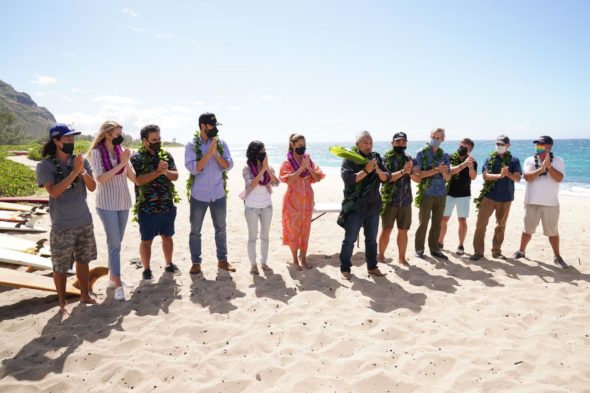 NCIS: Hawai’i is gearing up for its fall premiere. Production has begun on the newest addition to the NCIS franchise in Oahu. Before it began, the cast and crew had a traditional Hawaiian blessing for CBS shows filmed in Hawaii, like Magnum PI.

Vanessa Lachey, Noah Mills, Jason Antoon, Yasmine Al-Bustami, and Tori Anderson star in the new drama, and they were all in attendance at the ceremony.

CBS revealed more about the blessing and the series in a press release.

“New CBS original series NCIS: HAWAI’I kicked off its first season production at Mokulē‘Ia Beach on Oahu with a traditional Hawaiian blessing in honor of its host Hawaiian culture, which was held in line with the series’ overall filming safety protocols. The event took place on Wednesday, June 16.

Series stars Vanessa Lachey, Noah Mills, Jason Antoon, Yasmine Al-Bustami and Tori Anderson, as well as the producers and the NCIS: HAWAI’I crew, participated. Kahu (Officiant) Ramsay Taum officiated the ceremony, which included traditional royal maile leis, Oli Aloha (welcoming chant), and Pule Ho’oku’u (closing prayer). In honor of the show’s premiere season, the ceremony centered on the constant motion of the ocean and how the moving ocean waters, driven by the winds and tides, connects the entire planet.

NCIS: HAWAI’I will premiere in the fall, airing Monday (10:00-11:00 PM, ET/PT) on the CBS Television Network and available to stream live and on demand on the CBS app and Paramount+.”

What do you think? Are you planning to check out this new NCIS series on CBS this fall?

Not happy about Vanessa – too right she can’t act AT ALL. Was excited to hear about an NCIS in Hawaii. But what were they thinking with this lackluster cast? Will try it, not having high hopes. So many wonderful black actresses with real talent. What were they thinking? Not to mention the rest of the dull cast. Ready to bring down the NCIS dynasty, I guess….

Oh yes ! Love the other NCIS shows ~ but so sad NCIS New Orleans is gone !

Yes, definitely! We really miss Hawaii five-0, we love NCIS and Magnum PI, so are excited for this new addition.

Will definitely check it out. Love NCIS.

will give it a watch, if for nothing else to see how laughable vanessa lachey is at acting, STUPIDEST casting ever, she’s only x-list “famous”, because of who she married, a d- list former “celebrity” …im betting this show will be HEAVY on other n.c.i.s. cast appearances, doubt it will make it…they should have made the N.C.I.S. RED from the N.C.I.S. LOS ANGELES a few years ago a series instead

NCIS New Orleans was my favorite. Now that it has been cancelled, I will NOT be watching any of the NCIS shows.

Patti B
Reply to  Laura Martinez

I’m with you on this one. I can not see Vanessa being the boss what a joke. I think NCIS New Orleans has become the best NCIS very upset they are canceled. I will not be watching the new one.

I plan on watching the new NCIS: Hawaii. I look forward to it.

Ncis is the best cancelled Hawaii stupid idea ridiculous topic brought up don’t like it had to New Orleans badly good look forward every week now replacement to something else. Let go people.