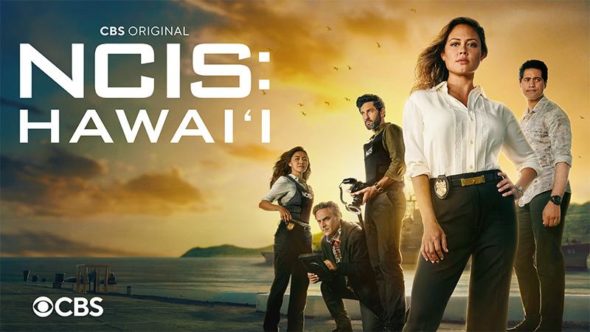 TV show description:
A procedural drama, the NCIS: Hawai’i TV series is the latest entry in the NCIS franchise and was created by Christopher Silber, Jan Nash, and Matt Bosack.

Jane Tennant (Lachey) is the first female Special Agent in Charge of NCIS Pearl Harbor. She has thrived and risen through the ranks by equal parts confidence and strategy in a system that has pushed back on her every step of the way.

Tennant and her team balance duty to family and country while investigating high-stakes crimes involving military personnel, national security, and the mysteries of the island paradise itself.

What do you think? Do you like the NCIS: Hawai’i TV show? Do you think it should be cancelled or renewed for another season?

Please bring it back for a 3rd season. Love NCIS Hawaii. Love the cast and characters. ♥️

I love the show. It has one of healthiest lesbian couple on tv right now. It really gets into the personal lives of the agents. Love Lucy & Tara. Tennant is great. Tge only NCIS I wTch.

Keep this show, I love it

NCIS Hawaii should be It Should be Renewed

All the major franchises have struggled to deliver a 3rd spin off show, CSI Cyber & Law & Order Justice both flopped after one season ending those franchises expansions. The X-Files only managed 3 shows before running out of steam, Babylon 5 just two. Star Trek in its main iteration cut short Enterprise with just 3 seasons instead of the normal 7 and currently Chicago and FBI sit at 3. Developing a 4th hit series is a challenge for any franchise Sadly NCIS Hawaii seems to fit the mold that a 4th show in the franchise is a show too… Read more »

I wasted an hour of my life watching this show . in a word it sucks