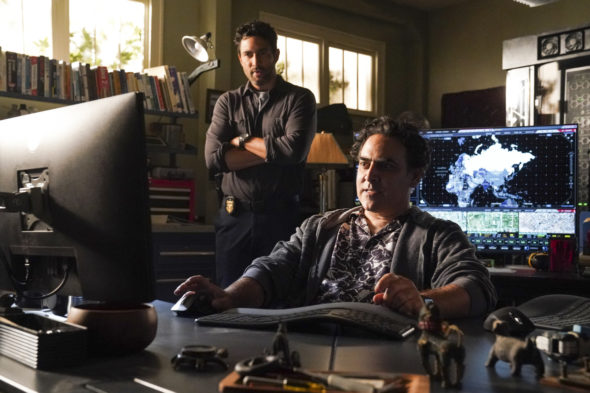 How well will this team work together in the first season of the NCIS: Hawai’i TV show on CBS? As we all know, the Nielsen ratings typically play a big role in determining whether a TV show like NCIS: Hawai’i is cancelled or renewed for season two. Unfortunately, most of us do not live in Nielsen households. Because many viewers feel frustrated when their viewing habits and opinions aren’t considered, we invite you to rate all of the first season episodes of NCIS: Hawai’i here.  *Status Update Below.

A CBS procedural drama, the NCIS: Hawai’i TV series is the latest entry in the NCIS franchise and stars Vanessa Lachey, Yasmine Al-Bustami, Jason Antoon, Noah Mills, Tori Anderson, Kian Talan, and Alex Tarrant. Jane Tennant (Lachey) is the first female Special Agent in Charge of NCIS Pearl Harbor. She has thrived and risen through the ranks by equal parts confidence and strategy in a system that has pushed back on her every step of the way. Her unwavering team of specialists includes junior field agent Lucy Tara (Al-Bustami); cyber intelligence specialist Ernie Malik (Antoon); second-in-command Jesse Boone (Mills); Defense Intelligence Agency Special Agent Kate Whistler (Anderson); and Kai Holman (Tarrant), a new NCIS agent. Tennant and her team balance duty to family and country while investigating high-stakes crimes involving military personnel, national security, and the mysteries of the island paradise itself.

What do you think? Which season one episodes of the NCIS: Hawai’i TV series do you rate as wonderful, terrible, or somewhere between? Do you think that NCIS: Hawai’i should be cancelled or renewed for a second season on CBS? Don’t forget to vote, and share your thoughts, below.

I have tried to watch this show on four occasions. I have never been able to watch an entire episode. The acting is terrible! I find myself trying to find a connection with the characters as none of them draw you in. It amazes me that this show has not been cancelled. It seems like an embarrassment to the network. It’s a pity it’s allowed to drone on week after week. Please end the suffering.

Yes! Cancel it! It’s poorly written and boring with B grade cast.