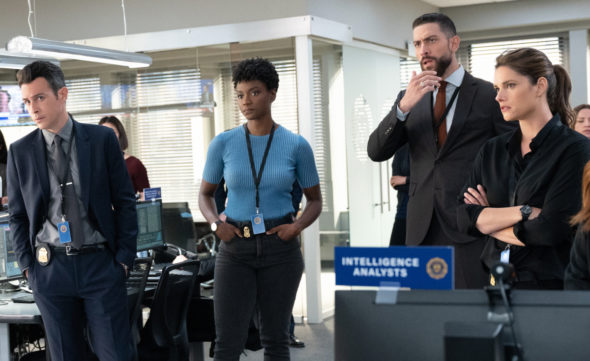 Is a whole night of FBI too much? Has the FBI TV show been cancelled or renewed for a fifth season on CBS? The television vulture is watching all the latest cancellation and renewal news, so this page is the place to track the status of FBI, season five. Bookmark it, or subscribe for the latest updates. Remember, the television vulture is watching your shows. Are you?

The fourth season of FBI averages a 0.65 rating in the 18-49 demographic and 7.48 million viewers. Compared to season three, that’s down by 22% in the demo and down by 5% in viewership in the live+same day ratings (including DVR playback through 3:00 AM). While these numbers don’t include further delayed or streaming viewing, they are a very good indicator of how a show is performing, especially when compared to others on the same channel. There can be other economic factors involved in a show’s fate, but typically the higher-rated series are renewed and the lower-rated ones are cancelled. Find out how FBI stacks up against other CBS TV shows.

Will CBS cancel or renew FBI for season five? This Dick Wolf series has performed well for the network and has spawned two spin-offs. I have no doubt that the FBI series will be renewed. I’ll update this page with breaking developments. Subscribe for free alerts on FBI cancellation or renewal news.

What do you think? Are you glad that the FBI TV show has been renewed for a fifth season? How would you feel if CBS cancelled this TV series, instead?

This is my favorite shoe

This is an excellent drama and the chemistry between the team is the glue.

FBI is our favorite program. It has at least two more seasons if not more of life. Viewers will be anxiously awaiting Missy’s return

I really love this show. I moved to an area with no internet or satellite signal for two years, so I started it over again when I moved. I was just checking for new seasons and saw it was in limbo. Please renew this show. I love the actors, and subject matter. It is very well thought out, and the writing is great.

I really like all three FBI shows best night on tv

I hope FBI is renewed. I love all 3 of the FBI shows