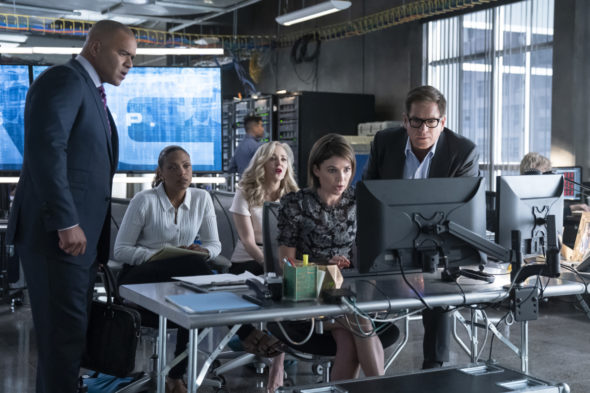 Is the TAC team still on top of its game? Has the Bull TV show been cancelled or renewed for a seventh season on CBS? The television vulture is watching all the latest cancellation and renewal news, so this page is the place to track the status of Bull, season seven. Bookmark it, or subscribe for the latest updates. Remember, the television vulture is watching your shows. Are you?

The sixth season of Bull averaged a 0.34 rating in the 18-49 demographic and 4.18 million viewers in the live+same day ratings (includes all DVR playback through 3:00 AM). Compared to season five, that’s down by 27% in the demo and down by 17% in viewership. While these numbers don’t include further delayed or streaming viewing, they are a very good indicator of how a show is performing, especially when compared to others on the same channel. There can be other economic factors involved in a show’s fate, but the higher-rated series are usually renewed and the lower-rated ones are cancelled. Find out how Bull stacks up against other CBS TV shows.

Will CBS cancel or renew Bull for season seven? The show has been a middle-of-the-road performer for the network and other shows with comparable ratings have been cancelled. It’s co-produced by CBS Television Studios so that has likely helped keep it on the air. Now, CBS has moved it to Thursday nights, a very competitive night for network TV. I think it has a good chance of being renewed it’s likely going to have a tough fight for viewers. I’ll update this page with breaking developments. Subscribe for free alerts on Bull cancellation or renewal news.

What do you think? Were you hoping the Bull TV show would be renewed for a seventh season? Are you sorry that the series is ending?

Awww, I enjoyed the show. So few shows anymore that are actually worth watching. Bummer this one is done.

Renew Bull. One of the best shows you have.

Keep Bull on the air! This show is so well written, intriguing, compellingly, and always keeps me engaged and entertained! I love this show, and want it to continue!!
Thank you – please renew!!