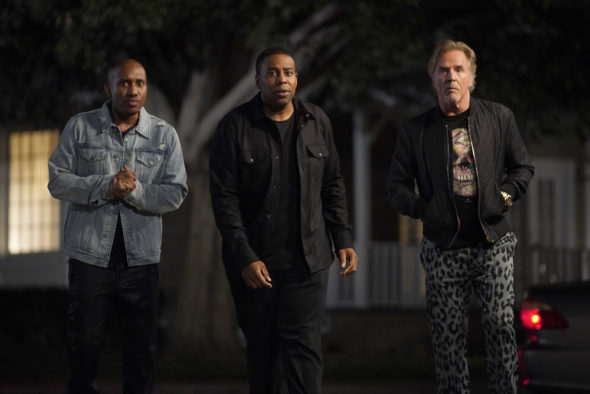 Will this single-dad find a new love in the first season of the Kenan TV show on NBC? As we all know, the Nielsen ratings typically play a big role in determining whether a TV show like Kenan is cancelled or renewed for season two. Unfortunately, most of us do not live in Nielsen households. Because many viewers feel frustrated when their viewing habits and opinions aren’t considered, we invite you to rate all of the first season episodes of Kenan here.  *Status Update Below.

An NBC single-camera comedy, the Kenan TV show stars Kenan Thompson, Don Johnson, Chris Redd, Kimrie Lewis, Dani Lane, and Dannah Lane. In the story, Kenan Williams (Thompson) is trying to reclaim his life following his wife’s death. Kenan’s two daughters are his world – the very intelligent Aubrey (Dani Lane) and the silly and unpredictable Birdie (Dannah Lane). He struggles to parent them as a single dad and host his Atlanta-based talk show. This leads Kenan to reluctantly accept help from his father-in-law, Rick (Johnson), but their parenting styles aren’t exactly a match. At work, Kenan excels at his job — with the help of his driven executive producer, Mika (Lewis). Mika can be tightly wound, especially when Gary (Redd), Kenan’s brother and not-so-professional manager, tries to insert himself.

What do you think? Which season one episodes of the Kenan TV series do you rate as wonderful, terrible, or somewhere between? Do you think that Kenan should be cancelled or renewed for a second season on NBC? Don’t forget to vote, and share your thoughts, below.

This is a modern take on those family shows 20 years ago. The casting is PERFECT. What is not to like? I am hooked. Please keep Kenan around for it’s sophomore year.

I really enjoy the Kenan show and will continue to watch it. In fact I can’t wait for Tuesday at 8:30pm to arrive so I can watch Kenan.
Please renew Kenan for a season 2.

I like the Rock and Kenan both and will continue to watch them. I hope Kenan will also stay with SNL, that’s how much I enjoy him, he make me laugh. And the Rock, what can I say about the Rock, he’s the ROCK.