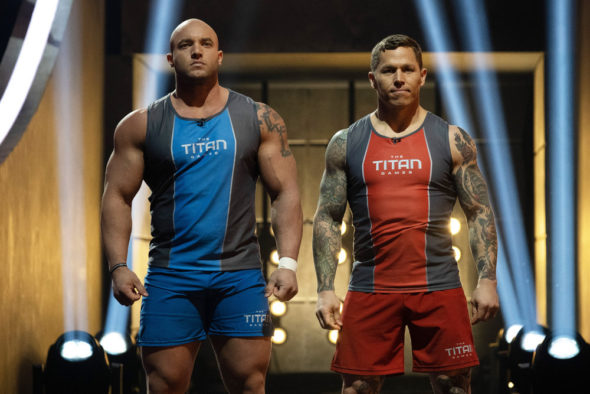 An NBC athletic competition, The Titan Games is hosted by executive producer Dwayne “The Rock” Johnson. Sports and entertainment journalist Cari Champion and Alex “Golden Boy” Mendez provide commentary. In season two, the competition has a new format with regional brackets and the addition of Professional Athlete Titans representing each region. Competitors from a regional division compete in a best of three competition. The winner moves on to battle a Pro-Athlete Titan on Mt. Olympus, the consummate athletic test of speed, strength, agility, and endurance.

What do you think? Which season two episodes of The Titan Games TV series do you rate as wonderful, terrible, or somewhere between? Do you think that The Titan Games should be cancelled or renewed for a third season on NBC? Don’t forget to vote, and share your thoughts, below.

Great show. At first I wasn’t sure if I would like it but it got better and better. Now I love it

The Titan Games Championship was stupid! Any athlete knows that the HUGE advantage goes to the winner of the first challenge if there is a second round to determine the challenger. This format was developed to appeal to a stupid non-athlete audience. I am amazed that a wannabe athlete like the host would lend his credibility to this farce! Has any idiot involved in this every heard of fatigue? The obvious fair way to conduct this would be to have the first two finishers in the first challenge compete on Mt. Olympus. But, that wouldn’t fill up the television hour…so… Read more »

Please don’t take off general hospital, The Rookie, none of the show because I like to watch them.

I think that Titan Games should renew for a season 3 definitely.I loved Season I and have watched the opening first episode of season 2.Its really awesome and I do love that that the competitors now go up against Titans on Mount Olympus