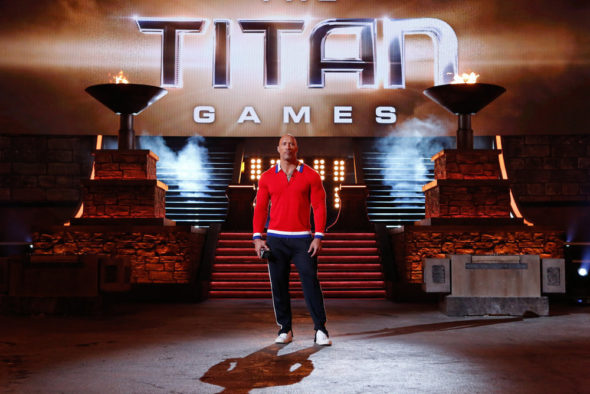 TV show description:
From creator and host Dwayne “The Rock” Johnson, The Titan Games TV show is an athletic competition reality TV series, billed as a “once-in-a-lifetime opportunity” for “everyday people.” Johnson designed the large-scale physical challenges, with an eye toward motivating the larger audience to maximize their potential.

In the the series, male and female contestants, from across the country, enter the Titan arena striving to achieve what seems to be “the impossible.” The punishing head-to-head challenges are meant to push the competitors to the limits and draw upon their speed and agility, as well as their mental and physical strength.

Each episode features men and women confronting the contest’s Mount Olympus, in hopes of conquering it and becoming a Titan. At the end of the season, the Titans return and compete against each other, with just one man and one woman being crowned the Titan Champion and winner of a large cash prize.

Series Finale:
Episode #22 — The Titan Games Championship
Regional competition has come to an end and the final Titans from the Central, West and Eastern divisions have advanced to the Championship. Those six elite Titans return for the final rounds of competition. The top two men and women will advance to compete on Mount Olympus one last time. In the end, one man and one woman will be crowned Titan Champions.
First aired: August 10, 2020.

What do you think? Do you like The Titan Games TV series? Should this NBC TV show have been cancelled or renewed for a third season?

I love “The Titan Games” and “American Ninja Warrior” (Or ANW) but the Titan Games does a few things better than other competitive shows. First, the challenges continue to change and the variety is much more exciting. I feel ANW is starting to get repetitive. You practically know the whole course from start to finish. With the Titan Games, each competitor also gets a spot light and the Rock does a great job at letting the each competitor be the star. With ANW, they pull you in with a back story on everyone. My gosh, often I find myself skipping… Read more »

I totally agree, I want to know when it starts back up, I watched every episode of The Titan Games, the only flaw in the show is of the rock cussing and the two other guys are cussing also, other than that , I’m very excited to see more contestants

“The Titan Games” is much more exciting, interesting and fun to watch than Ninja Warriors. I am anxiously and enthusiastically looking forward to viewing The Titan Games for years to come. Please continue to produce The Titan Games with Dwayne “The Rock” Johnson as the host. The Titan Games is a positively great, and exhilarating television show.

Please don’t cancel this show in fact promote it more! It’s nice to see everyday average people competing for a trophy! This is inspirational and good for our country especially with our country being in a battle with an obesity epidemic. I not only watched but also recorded each episode for me to watch right before my workouts!!

Loved loved loved the show! Please bring it back for another season!!!!

Love this show it shows that if you push your hardest you can do anything . Another season for sure maybe more I hope .

One of the best shows on TV….Love it, please don’t cancel.