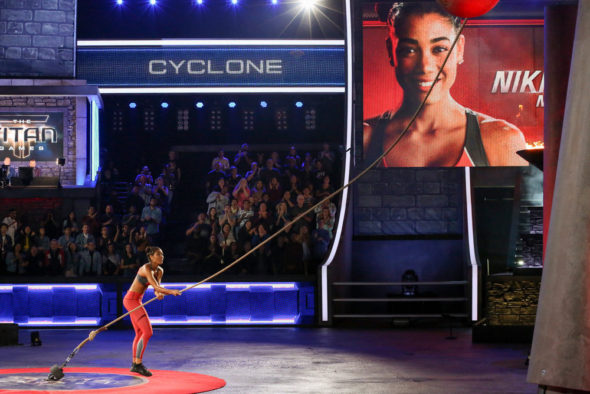 Do the Titans still rule Olympus? Has The Titan Games TV show been cancelled or renewed for a second season on NBC? The television vulture is watching all the latest cancellation and renewal news, so this page is the place to track the status of The Titan Games season two. Bookmark it, or subscribe for the latest updates. Remember, the television vulture is watching your shows. Are you?

An NBC athletic competition, The Titan Games was created by Dwayne “The Rock” Johnson, who hosts the series. Sports and entertainment journalist Cari Champion serves as field reporter, with Liam McHugh and Alex “Golden Boy” Mendez providing color commentary. Each episode features men and women confronting the contest’s Mount Olympus, in hopes of conquering it and becoming a Titan. At the end of the season, the Titans return and compete against each other, with just one man and one woman being crowned the Titan Champion and winner of a large cash prize.

The first season of The Titan Games averaged a 1.28 rating in the 18-49 demographic and 5.02 million viewers. Find out how The Titan Games stacks up against other NBC TV shows.

Although it premiered with good numbers, it is still too soon to use the ratings to predict whether NBC will cancel or renew The Titan Games for season two. I predict it will get a second season, because The Rock has a big fanbase and reality TV series are cheaper to produce that scripted shows. Since that’s just speculation, I’ll keep a hungry on the ratings and update this page with breaking developments. Subscribe for The Titan Games cancellation and renewal news alerts.

9/17/19 update: The Titan Games has been officially renewed for a second season by NBC.

What do you think? Are you glad that The Titan Games has been renewed for a second season? How would you feel if NBC cancelled this TV show, instead?