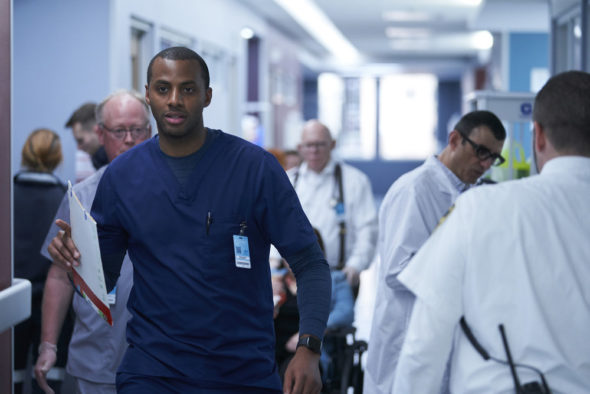 Can these young professionals handle what’s to come in the first season of the Nurses TV show on NBC? As we all know, the Nielsen ratings typically play a big role in determining whether a TV show like Nurses is cancelled or renewed for season two on NBC (it’s already been renewed in Canada). Unfortunately, most of us do not live in Nielsen households. Because many viewers feel frustration when their viewing habits and opinions aren’t considered, we invite you to rate all of the first season episodes of Nurses here.

A Global and NBC medical drama series, Nurses stars Tiera Skovbye, Natasha Calis, Jordan Johnson-Hinds, Donald MacLean Jr., and Sandy Sidhu. Set in Toronto, the TV show follows five young nurses who are working on the frontlines of a busy downtown hospital. They’re dedicating their lives to helping others, while struggling to help themselves. Grace Knight (Skovbye) is a young nurse looking for a fresh start — until someone from her past turns up who could jeopardize her career. Ashley Collins (Calis) is a wild and unapologetic adrenaline junkie who lives for the fast pace of the hospital. There’s also a huge heart hidden behind her tough exterior. Meanwhile, Keon Colby (Johnson-Hinds) is a former college football star who’s trying to prove there’s more to him than what people saw on the field. Nazneen Khan (Sidhu) is the whip-smart daughter of a wealthy family in India. She moved to Canada to reinvent herself and is now starting her first job. Finally, Wolf Burke (MacLean Jr.) is kind-hearted and playful but he also has a secret that may find him in over his head.

What do you think? Which season one episodes of the Nurses TV series do you rate as wonderful, terrible, or somewhere between? Do you think that Nurses should be renewed for a second season on NBC? Don’t forget to vote, and share your thoughts, below.

NBC Please renew Nurses!!!!!!!!!!!!!
I ABSOLUTELY LOVE this show and you are my only chance to continue watching it.

I loved Nurses and hope we get more seasons of it

Nurses is a great show. Why is it when we get good shows they never stay. All the violent and sci-fi trash never gets cancelled. I wish we could be like Canada. They do it right.!!!!!

love this show , don’t want to see it cancelled

The characters are boring. Nothing is having me to come back to get to know them more.

“Nurses” is definitely a boring show. And I was shocked at the anti-Semitism. That story was definitely not based on truth. There are many good medical shows on tv. Certainly it would be nice of have one based on the careers of nurses, rather than doctors. But this isn’t it. It is an insult to nurses and to viewers!

Most inaccurate portrayal of nurses
Ever seen it’s a slap in the face to nurses. I’m a nurse for over 25 years this show is a joke

The characters are boring and the writing is boring.

As a nurse of 47 years, this show is so bizarre, unrealistic and an insult to all nurses. Please, I beg you, pull the plug on this one STAT!!!!!!!!!

Omg !!!!!‘ I was so excited to finally see a nurse show as all the other medical shows are never showing what nurses really do.
This is a joke. I am a nurse and This could have been such a great opportunity to show what we truly do.
Epic fail!!!!! Should have at treats had nurses consult!!!!!
Terrible show.

I am also a nurse and this is BY FAR the worst portrayal of nursing I have ever seen. Oh my gosh, it was just so unbelievably bad!!!

What’s wrong with just having a decent show to watch that has a great story line.
Every show that you watch isn’t like it is in real life, they’re all make believe unless it’s Dateline or 20/20.
I very much enjoyed the story line and hope there’s a Season 2

I am nurse and I couldn’t stand watching it after 10 minutes.
My god! So ******* ridiculous! Whoever made this medical drama needs to do their research and talk to nurses.

This type of show is legitimately an insult to nurses, particularly in this year of COVID. There are about a million unbelievable situations in the pilot alone. We are so much more than what’s portrayed here. What’s sad is that the folks who made this show clearly didn’t even bother talking to nurses.

I agree! Unfortunately I have family with medical issues, and I have always seen care and knowledge in nurses I’ve met.
More so than doctors.