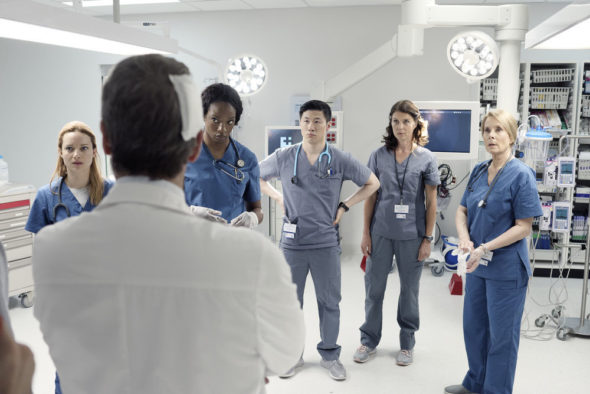 Will Bash be successful in the first season of the Transplant TV show on NBC? As we all know, the Nielsen ratings typically play a big role in determining whether a TV show like Transplant is cancelled or renewed for season two (it’s been renewed in Canada). Unfortunately, most of us do not live in Nielsen households. Because many viewers feel frustrated when their viewing habits and opinions aren’t considered, we invite you to rate all of the first season episodes of Transplant here. *Status update below.

A Canadian medical drama that airs on NBC in the United States, the Transplant TV show stars Hamza Haq, Laurence Leboeuf, John Hannah, Jim Watson, Ayisha Issa, Linda E. Smith, and Torri Higginson. Doctor Bashir Hamed (Haq) is a charismatic Syrian doctor with battle-tested skills in emergency medicine. He and his younger sister, Amira (Gulamgaus) flee their war-torn homeland and become refugees, struggling to forge a new life in Canada. When a horrific truck crash nearly kills a senior doctor right in front of him, Bash saves the doctor’s life and earns a residency in the biggest Emergency Department of the best hospital in Toronto. Through it all, Bash tries to meet the demands of his new country and a new job, while trying to pay the bills, raise his little sister and carve out a new life for them both in this unfamiliar land.

What do you think? Which season one episodes of the Transplant TV series do you rate as wonderful, terrible, or somewhere between? Do you think that Transplant should be cancelled or renewed for a second season on NBC? Don’t forget to vote, and share your thoughts, below.

*12/11/20 update: NBC has picked up the second season of the Transplant TV series.

Loved this show!!!
Can’t wait for the next season to begin!!!❤️

Love transplant I would love to see more I love medical shows there my favorites there are goods ones that got cancelled and wished they weren’t cancelled so I hope this one stays on I want more of this show please keep it going.

Lousy show. There are already too many lame medical shows on TV. This one definitely needs to be cancelled.

Wonderful program I hope they make many more? Second series commissioned looking forward to watching it then behavioural patterns perhaps I could put more characters in the program.

Please renew a second season and on. I dont
watch much prime tv but this show keeps me glued

My sister and I thoroughly enjoy Transplant. Bashir is really an engaging character. The story plots are fascinating and we look forward to its return soon!

I enjoy watching Transplant from the beginning. The story lines are realistic + kept my attention. I am happy there will be a season 2.

Love this show, and don’t want it to be cancelled now or ever!!!! It has become one of my most favorite show!!!! Thanks!

Love this show! Please bring 2nd season and many more.

Really loved Transplant. Love the show. Very riveting. Look forward to watch it. I hope they make more. Shot in Canada,??!! Very awsome that such good clean entertainment is done in Canada

I have really enjoyed this show. The situations, people, and back story are all quite engrossing, please have a season 2
Looks like there are many medical shows on Tv and other good ones on nbc(new Amsterdam). But transplant is unique in quality! Thank you j