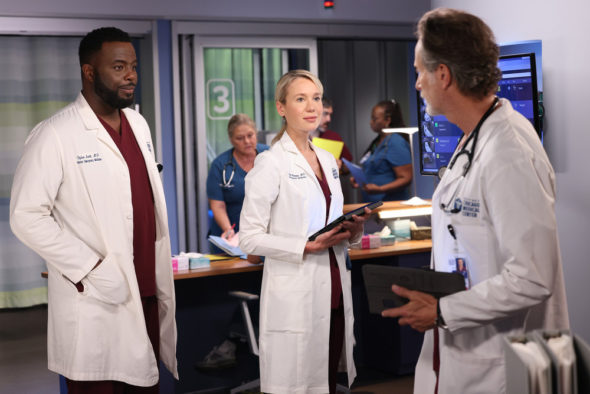 What new challenging cases are coming in the seventh season of the Chicago Med TV show on NBC? As we all know, the Nielsen ratings typically play a big role in determining whether a TV show like Chicago Med is cancelled or renewed for season eight. Unfortunately, most of us do not live in Nielsen households. Because many viewers feel frustration when their viewing habits and opinions aren’t considered, we invite you to rate all of the seventh season episodes of Chicago Med here.

What do you think? Which season seven episodes of the Chicago Med TV series do you rate as wonderful, terrible, or somewhere between? Are you glad that Chicago Med has been renewed for an eighth season on NBC? Don’t forget to vote, and share your thoughts, below.

This is my only go-to show. I really like Oliver Platt as the psychiatrist. He has such compassion for all patients and knows how to talk to them while gaining their trust.

I love the show please keep it on the air

Love this show along with Chicago Fire and Chicago PD

The show is great!! Doc Cho needs to come back’ all healed. There love lifes suck but there trying like really people. I love Wednesday all the story The Chicago stories are on Chicago. PD ‘ Chicago Med’0 Chicago Fire all wonderful storys!! Best on TV

So glad that Ethan is back!!

Chicago 3 seem to lose too many characters. Not helping the shows to do that.

Starting the new season I was shocked, I don’t like all the new changes of characters was hoping to see Natalie and that other doctor get together if we’re a good pair can’t remember what his name is though.