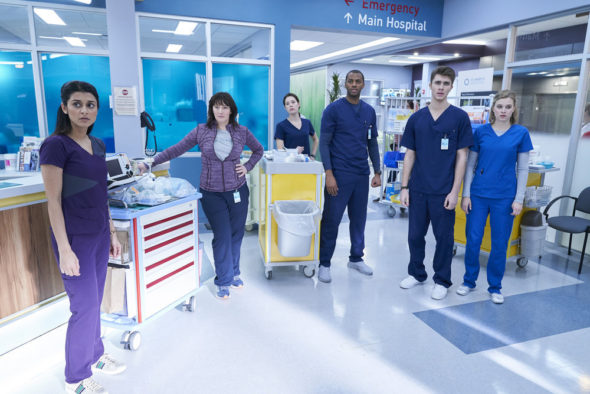 TV show description:
Set in Toronto, the Nurses medical drama series follows five young nurses who are working on the frontlines of a busy downtown hospital. They’re dedicating their lives to helping others while struggling to help themselves.

Grace Knight (Skovbye) is a young nurse looking for a fresh start — until someone from her past turns up who could jeopardize her career.

Ashley Collins (Calis) is a wild and unapologetic adrenaline junkie who lives for the fast pace of the hospital. There’s also a huge heart hidden behind her tough exterior.

Keon Colby (Johnson-Hinds) is a former college football star who’s trying to prove there’s more to him than what people saw on the field.

Nazneen Khan (Sidhu) is the whip-smart daughter of a wealthy family in India. She moved to Canada to reinvent herself and is now starting her first job.

Wolf Burke (MacLean Jr.) is kind-hearted and playful but he also has a secret that may find him in over his head.

What do you think? Do you like the Nurses TV show? Do you think it should be cancelled or renewed for another season?

I think it’s a fine show and definitely should be renewed. All the actors, stories and plot lines are good. Great cliff-hanger at the end of first season! If any chance of renewal, I’ll be watching. A medical professional neighbor also likes the show; we have the company of many other fans, surely !

We love this new series. The story lines are great and the characters are interesting. Acting is so good. Please bring it back.

Definitely, absolutely feel that it should be renewed. I feel that the program involving an orthodox Jewish man rankled the feathers of some execs. Folks, this is reality! Nurses face complex, ethical decisions as part of their challenging careers everyday.

Nurses is a great show. Love watching it until I couldn’t find it. Same as men in trees. Never got to finish that one either. Bad trend. Reality shows are not for everyone. Especially not for me.

Nurses is a very good series and includes a variety of personalities and challenges they face. I would love to see it continue.

Nurses is a great series showcasing a group of young people growing in their career. It is a very entertaining show and the cast is superb!

I like this show. Hope it is renewed. I agree that it is far from reality, but entertaining in a positive way.