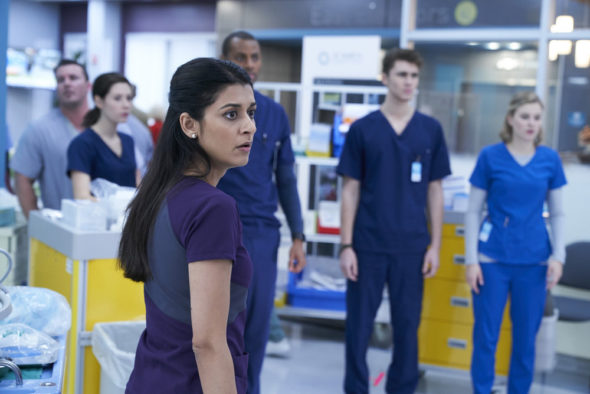 Can these medical professionals hold it together? Has the Nurses TV show been cancelled or renewed for a second season on NBC? The television vulture is watching all the latest cancellation and renewal news, so this page is the place to track the status of Nurses, season two. Bookmark it, or subscribe for the latest updates. Remember, the television vulture is watching your shows. Are you?

Airing on the NBC television network, Nurses stars Tiera Skovbye, Natasha Calis, Jordan Johnson-Hinds, Donald MacLean Jr., and Sandy Sidhu. Set in Toronto, the TV show follows five young nurses who are working on the frontlines of a busy downtown hospital. They’re dedicating their lives to helping others, while struggling to help themselves. Grace Knight (Skovbye) is a young nurse looking for a fresh start — until someone from her past turns up who could jeopardize her career. Ashley Collins (Calis) is a wild and unapologetic adrenaline junkie who lives for the fast pace of the hospital. There’s also a huge heart hidden behind her tough exterior. Meanwhile, Keon Colby (Johnson-Hinds) is a former college football star who’s trying to prove there’s more to him than what people saw on the field. Nazneen Khan (Sidhu) is the whip-smart daughter of a wealthy family in India. She moved to Canada to reinvent herself and is now starting her first job. Finally, Wolf Burke (MacLean Jr.) is kind-hearted and playful but he also has a secret that may find him in over his head.

The first season of Nurses averaged a 0.32 rating in the 18-49 demographic and 2.33 million viewers. Find out how Nurses stacks up against other NBC TV shows.

Will NBC cancel or renew Nurses for season two? This show originates on the Global channel in Canada and it’s already been renewed for a second season there. There’s no guarantee that the peacock network will air season two but, unless the show’s ratings completely tank, I’m confident that season two will air on NBC. I’ll update this page with breaking developments. Subscribe for free alerts on Nurses cancellation or renewal news.

What do you think? Do you hope the Nurses TV show will be renewed for a second season on NBC?

Yes, please renew for season 2. I loved the show.

nurses definitely needs to come back for another season in the states,show & characters are awesome,one of my favorite shows,please bring it back to nbc thanks

Yes Please bring back to NBC

Ummm YES! how dare they not renew!!! Every other show on NBC is so not worth watching

Yes bring the show back to the US, everything is falling down around us with this virus and all,so at least let us keep watching something we enjoy instead of all the sad news on tv!!!

Yes, yes, please have another season of Nurses.