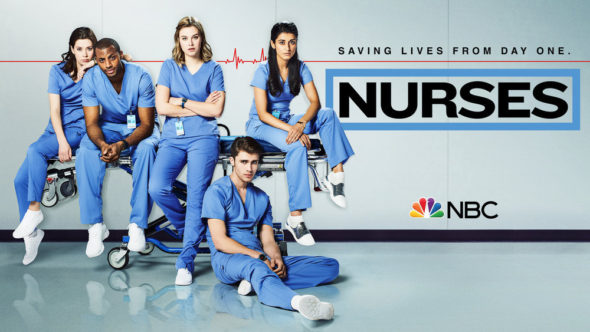 Like Transplant, the Nurses TV series originates in Canada. It’s already been renewed for a second season there but there’s no guarantee that NBC will air those episodes. Could the peacock network cancel it in the United States if the ratings aren’t high enough? Stay tuned.

A medical drama series, Nurses stars Tiera Skovbye, Natasha Calis, Jordan Johnson-Hinds, Donald MacLean Jr., and Sandy Sidhu. Set in Toronto, the TV show follows five young nurses who are working on the frontlines of a busy downtown hospital. They’re dedicating their lives to helping others, while struggling to help themselves. Grace Knight (Skovbye) is a young nurse looking for a fresh start — until someone from her past turns up who could jeopardize her career. Ashley Collins (Calis) is a wild and unapologetic adrenaline junkie who lives for the fast pace of the hospital. There’s also a huge heart hidden behind her tough exterior. Meanwhile, Keon Colby (Johnson-Hinds) is a former college football star who’s trying to prove there’s more to him than what people saw on the field. Nazneen Khan (Sidhu) is the whip-smart daughter of a wealthy family in India. She moved to Canada to reinvent herself and is now starting her first job. Finally, Wolf Burke (MacLean Jr.) is kind-hearted and playful but he also has a secret that may find him in over his head.

2/24 update: You can see the latest night’s ratings in context.

What do you think? Do you like the Nurses TV series on NBC? Should it be cancelled or renewed for a second season?

Knowing that that there is a season 2 of Nurses out and has only been renewed and released in Canada. I loved this show and what upsets me is why spend all this money into making a series, ending the season with cliff hangers in which makes you feel that there will be another season coming & you can’t wait because you want to know how it all played out. However, these stations just seem to love leaving you hanging on that cliff forever. I would think that, that alone would make ratings go down. For those who have not… Read more »

I watch very little in the way of new tv series….but for some reason this show caught my attention. I am glad it did….because it is absolutely awesome! I am completely hooked and cannot wait (& am desperately hoping) for season two!! I love this show!

I’m one of the very few people who have latched onto this show. I always felt that nurses were undervalued and I was curious to see if this show would deal with that issue.
What strikes me often in this show is how much time doctors and nurses seem to have on their hands — able to spend quality time with patients and hold their hands and listen to their troubles. I always thought doctors and nurses led busy lives, lol.

I love this show it has great story lines and great new twists and turns.