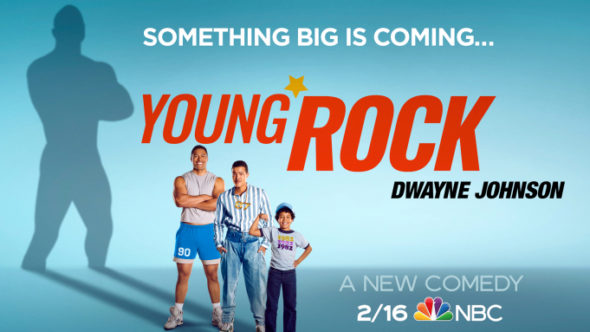 Dwayne Johnson has had an impressive career on the big screen but, how will his biographical TV show, Young Rock, perform in the ratings?  Will it be renewed for a second season and perhaps run for many years on NBC or, will it be cancelled like most TV shows are?  Stay tuned.  *Status Update Below.

A comedy series, the Young Rock stars Dwayne “The Rock” Johnson, Joseph Lee Anderson, Stacey Leilua, Adrian Groulx, Bradley Constant, Uli Latukefu, Ana Tuisila, Fasitua Amosa, and John Tui. The TV show is based upon the life of Johnson, a professional wrestler and actor. In addition to the real Johnson talking about his lifetime of memories from the year 2032, stories are told through his experiences at three different points. At age 10, Dwayne (Groulx), aka Dewey, is honest, headstrong, impressionable, and bold. At age 15, Dwayne (Constant) is doing his best to fit in like a normal teenager but puberty has other ideas. His size and full mustache have his classmates convinced he’s an undercover cop. Then, at age 18-20, Johnson (Latukefu) has just been recruited to play football on a full scholarship at the powerhouse University of Miami. Though he has amazing physical abilities, a devastating injury his freshman year puts his life at a crossroads.

5/5 update: You can see the latest night’s ratings in context.

What do you think? Do you like the Young Rock TV series on NBC? Should it be cancelled or renewed for a second season?

*5/1/21 update: Young Rock has been renewed for a second season on NBC.

I enjoyed this show until I noticed that Christians were being portrayed consistently on the show in really ugly ways. As a result we have stopped watching the show and lost a lot of respect and trust for Dwayne Johnson.

Wow, the ratings for this have dropped off a cliff in just a few episodes. I didn’t think I would try to watch it but it looks like people aren’t liking it.

Think it’s based upon his political views that he went to express. Because I was one of those people that really adored him. But after he start mouthing off I lost that much respect for him. As an actor I think he’s wonderful but I think he’s one of these actors athletes who should just shut up and do what he does best without having to add to the problems of the world today.

I give it one season, and then not renewed. I guess only Hawaii, and American Samoa are watching 🙂
A sign he shouldn’t run for President for a long while.