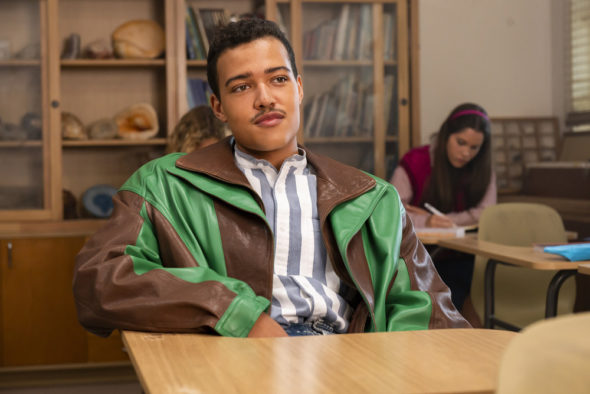 Does The Rock’s life make for good television? Has the Young Rock TV show been cancelled or renewed for a second season on NBC? The television vulture is watching all the latest cancellation and renewal news, so this page is the place to track the status of Young Rock, season two. Bookmark it, or subscribe for the latest updates. Remember, the television vulture is watching your shows. Are you?

Airing on the NBC television network, the Young Rock stars Dwayne “The Rock” Johnson, Joseph Lee Anderson, Stacey Leilua, Adrian Groulx, Bradley Constant, Uli Latukefu, Ana Tuisila, Fasitua Amosa, and John Tui. The TV show is based upon the life of Johnson, a professional wrestler and actor. In addition to the real Johnson talking about his lifetime of memories from the year 2032, stories are told through his experiences at three different points. At age 10, Dwayne (Groulx), aka Dewey, is honest, headstrong, impressionable, and bold. At age 15, Dwayne (Constant) is doing his best to fit in like a normal teenager but puberty has other ideas. His size and full mustache have his classmates convinced he’s an undercover cop. Then, at age 18-20, Johnson (Latukefu) has just been recruited to play football on a full scholarship at the powerhouse University of Miami. Though he has amazing physical abilities, a devastating injury his freshman year puts his life at a crossroads.

The first season of Young Rock averaged a 0.62 rating in the 18-49 demographic and 3.04 million viewers. Find out how Young Rock stacks up against other NBC TV shows.

Will NBC cancel or renew Young Rock for season two? The network hasn’t had much luck launching sitcoms lately so I think they’ll give this one every chance to succeed. In that the show features a bankable star like Johnson (who also hosts NBC’s The Titan Games), I think that it will be renewed. I’ll update this page with breaking developments. Subscribe for free alerts on Young Rock cancellation or renewal news.

5/1/21 update: Young Rock has been renewed for a second season on NBC.

What do you think? Are you glad that the Young Rock TV show has been renewed for a second season? How would you feel if NBC had cancelled this TV series, instead?

I like Dwayne! He is genuinely funny and entertaining. Of course he is also so good looking! Right now, I am watching “The Tooth Fairy” one of my favorite movies. He must have a great sense of humor to do a movie like this. It is so funny, esp.”The Rock” in tights and tutu! Norma Jean Morrissey “Rock Fan”

I am in the grandmother age group and I love ❤️ this show! I never watch regular TV! Dwayne Johnson is very talented and how his family gave him strong family values is refreshing! I miss not having this on my play list. Seriously hope it has a second season! In the meantime back to Netflix and HGTV!

It’s entertaining enough so I hope they give it another season to develop.

Well i really don’t watch it regularly perhaps if they put it on netflix or hulu i might watch it more.