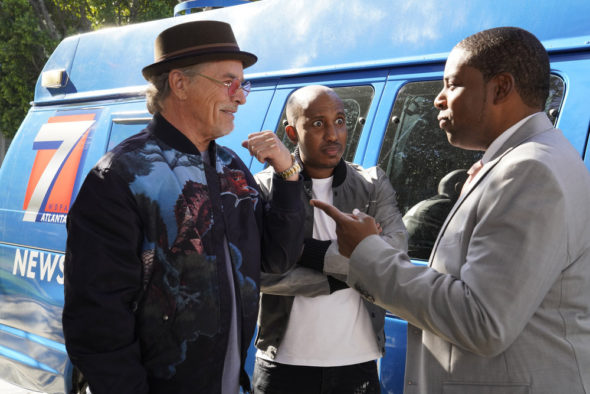 If you’ve been waiting for the series premieres of the Keenan (above) and Young Rock TV shows, there’s good news for you today. NBC has announced that the new half-hour comedies will launch on Tuesday, February 16th.

They’ll be taking over the 8:00 PM timeslot currently held by Zoey’s Extraordinary Playlist. The musical dramedy is going on hiatus after just six episodes and won’t return until sometime in the spring.

Here are NBC’s press notes about the premieres:

“YOUNG ROCK”
“Young Rock” focuses on different chapters of Dwayne Johnson’s life. From growing up in a strong and resilient family, to being surrounded by the wild characters of his professional wrestling family, to playing football at the University of Miami, the show will explore the crazy rollercoaster that has shaped Dwayne into the man he is today and the larger-than-life characters he’s met along the way.

“KENAN”
Kenan, a recently widowed host of Atlanta’s #2 morning show, struggles to balance his job and his young daughters despite all the “help” he gets from his father-in-law and his brother/manager/house guest.
Kenan Thompson, Chris Redd, Kimrie Lewis, Dani Lane, Dannah Lane and Don Johnson star.

“Kenan” is produced by Universal Television, a division of Universal Studio Group, in association with Broadway Video.

Note: Following its sixth episode of the season on Feb. 9, “Zoey’s Extraordinary Playlist” will go on hiatus and return in the spring. The second season is off to a strong start with the premiere setting an all-time series record with 3.0 million viewers in live-plus-same-day. That figure now currently stands at 4.7 million.

What do you think? Do you plan to check out the Young Rock and/or Keenan TV series on NBC? Are you disappointed that Zoey’s Extraordinary Playlist is going on hiatus?

I am a fan of Zoeys Playlist but the sex scene and drug scene of the last couple of episodes have left me questioning if I want to continue viewing. I WILL NOT recommend watching this season of Zoey to my friends . I never questioned recommending this show prior to this season

Zoey’s Extraordinary Playlist is a great show! The stories are entertaining and relevant, the music and choreography is fantastic. It makes you think and tap your toes! Please don’t cancel it! The showcased talent of the show makes you want more!

I loved Zoey. Maybe netflix or Amazon will pick that show up.

I hate it! We love Zoey.

Leave Zoey’s alone. Why disturb it’s momentum? Move other shows around. I suggest you take off Nurses & Mr. Mayor instead. They most likely will be cancelled.

Please, ease don’t let Zoe’s Extoadinary Playlist get lost and go away! It is such a wonderful show, especially while all of us Musical Fans miss Broadway! The cast is such an amazing ensemble and the stories make you laugh, cry and think. Such good representation on this show too! Don’t let it go! With that said Kenan is an icon and deserves success in his endeavors!

I have absolutely no desire to watch either of these new shows! Leave Zoeys Extraordinary Playlist alone!
Guess I’ll stop watching NBC until it returns.

I’m sad Zooey’s Extraordinary Playlist is going on a hiatus til the spring, but just as long as it comes back! ♥️

I love Zoey’s, what is up with this?