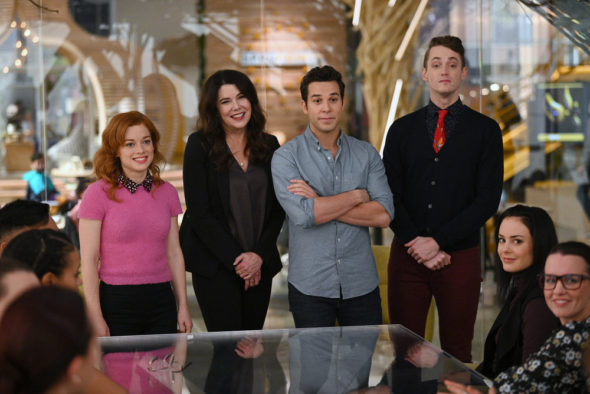 NBC is adding more tunes to its playlist. The network just announced they’ve ordered a second season of Zoey’s Extraordinary Playlist for the 2020-21 season.

The musical dramedy stars Jane Levy as a whip-smart computer coder who’s making her way in San Francisco. After an unusual event, Zoey, who always preferred podcasts over pop songs, suddenly starts to hear the innermost wants, thoughts, and desires of the people around her – her family, co-workers, and complete strangers – through popular songs. The cast also includes Skylar Astin, Alex Newell, John Clarence Stewart, Peter Gallagher, and Mary Steenburgen with Lauren Graham as a special guest star.

The first season of Zoey’s Extraordinary Playlist averaged a 0.42 rating in the 18-49 demographic with just 2.00 million viewers. Even the series doesn’t do that well in the Live+same day ratings (the series ranks 15th out of 19 scripted series), Zoey’s Extraordinary Playlist has done much better in delayed viewing. Likely for that reason, NBC has decided to give Zoey a second chance.

Here’s the network’s press release about the renewal:

NBC FEELS THE MUSIC WITH RENEWAL OF “ZOEY’S EXTRAORDINARY PLAYLIST”

UNIVERSAL CITY, Calif. – June 11, 2020 – NBC is bringing more song and dance to the network with the season two renewal of its critically acclaimed and buzzworthy new series “Zoey’s Extraordinary Playlist.”

“We were overwhelmed by the number of people who fell in love with ‘Zoey’s Extraordinary Playlist’ and how much joy it brought to everyone. We’re thrilled to bring it back and can’t wait to see how Zoey’s journey continues,” said Lisa Katz and Tracey Pakosta, Co-Presidents of Scripted Programming, NBC Entertainment.

The series centers on Zoey Clarke, a whip-smart computer coder forging her way in San Francisco. After an unusual event, Zoey, who always preferred podcasts over pop songs, suddenly starts to hear the innermost wants, thoughts and desires of the people around her – her family, co-workers and complete strangers – through popular songs. At first, she questions her own sanity, but after getting some guidance from her musically adept neighbor, Mo, and making a breakthrough with her ailing father, Zoey soon realizes this unwanted curse may just be an incredibly wonderful gift as she connects with the world like never before.

Season one of “Zoey’s Extraordinary Playlist” averaged a 0.7 rating in adults 18-49 and 3.1 million viewers overall in “live plus seven day” Nielsens, with the Jan. 7 series pilot growing to a 3.3 rating in 18-49 and 7.9 million viewers with digital and linear delayed viewing recorded to date. It’s one of NBC’s strongest digital performers, generating more than half its 35-day viewership in the 18-49 demo from digital sources.

Critics have adored the series, which concluded its 12-episode first season in May. Variety called the show “the rare broadcast series that keeps winning fans and acclaim,” TV Guide said it’s a “a whimsically tuneful winner” while Entertainment Weekly wrote that “Zoey’s” is “groundbreaking.”

What do you think? Did you watch the Zoey’s Extraordinary Playlist TV show? Will you watch season two on NBC?

I absolutely love this show!! Please please come
back!!

I will definitely be watching Zoey. I absolutely loved the story line and how it was presented. Can’t wait for season 2! And I know many of my coworkers are looking forward to seeing it also.

Love this amazing show! I can’t wait for the second season. The characters, singing, dancing, acting are superb. I have watched – particularly- the American Pie episode over and over. Hopefully Peter Gallagher will be back in some capacity. After all, Zoey does have some unique abilities.

My favorite show of last season, of course I’ll be watching this coming season! Jane and the cast and crew are fantastic!

I love “Zoey’s….” It’s an exhilarating, yet emotional program that has everything: GREAT singing, dancing, drama, comedy, romance. It’s witty and engaging. I am thrilled that it’s been renewed.”

Maureen A Wagner
Reply to  Lauren

Absolutely the perfect remedy for a stressful world. I love that Zoey is dealing with a terminally ill father. Please expand the Mother and Father’s characters. These are “teachable moments.’ The guy caregiver is amazing. I love his deaf daughter and her strengths. Keep her in the show!! Your show teaches compassion when the family dynamics break down. This is very real and families grapple with “caregiver responsibilities” ever-changing nd all the time Love that you show her Dad’s perspective! So important. Your show teaches while it entertains….BRAVO! I grew up with a Mom in a wheelchair with MS and… Read more »

I loved it, and I’m thrilled that it has been renewed! I’m one of those fans that record the show, and watch it at a future time. There are very few shows on TV that I follow, and this one ranks high on my list.

I concur. Zoey is an intelligent, well written, fun show. Characters are all zany exaggerations of people we each know versions of. (Well we know a few of them at least). I keep wondering who Zoey will end up with…for tonight at least. She holds it all together, looking fabulous the whole time. Jane levy has the “IT” factor if you ask me. She has a special sparkle in her eyes.

Our family absolutely loved everything about Zoey and the gang! We didn’t miss a show (however we do record &/or watch streaming next day). We are so pleased to find out that the show will return for a 2nd season! Can’t wait!!!

/me is happy.
As already said on other post about the show : the general story is not that fabulous but the work put in the singing/dancing must be appreciated.
I want to appreciate more 🙂

Very happy Zoey Playlist is renewed. I am not your demographic I’m age 73 BUT I am the person who calls her millennial children and encouraged them to watch this creative fun original show. I even called daughter who is planning wedding with great songs to include lol. The father’s death was so beautifully handled but I will miss him. Looking forward to new season

I loved every moment of this show and am so happy it was renewed.Thank you NBC for having the intelligence to continue a show that has heart and soul and great music. I hope it will be repeated on a good time slot this summer so more people will get to know and enjoy a happy well acted experience. Bravo cast.

I’m delighted that this has been renewed for a 2nd season.