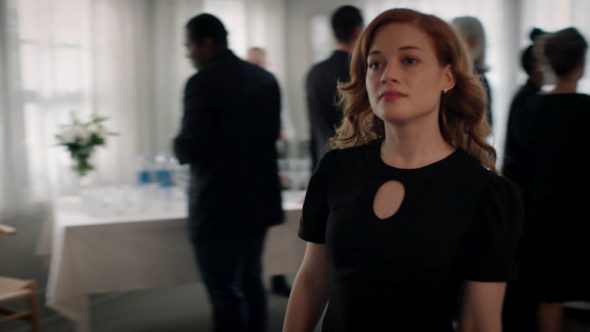 Deadline revealed the following about their roles on the NBC comedy:

“Leeds’ David is Zoey’s older brother and a public defender who is dealing with losing his father while becoming a father for the first time.

Lee’s Emily, David’s wife, is also a lawyer. Emily is balancing the joys and pains of new motherhood while coping with a newly grieving family.

Grant’s Leif is a wide-eyed and seemingly sweet-natured programmer who suddenly finds himself in a new position at Sprq Point.

Talwalkar’s Tobin is another programmer at Sprq Point, who uses humor and insults to mask a deep inner complexity.”

Zoey’s Extraordinary Playlist follows Levy as her Zoey character deals with hearing the thoughts of everyone around her in popular songs. At first, she questions her own sanity but soon realizes this unwanted curse might just be an incredibly wonderful gift.

What do you think? Are you excited to see more of these characters during season two of Zoey’s Extraordinary Playlist on NBC?

It was so important to see a variety of disabled people in Season One! All families dealing with everything from Deafness to Death and Dying found a piece of our lives in your storytelling. A culturally “taboo topic” …death… given face and a “voice/song.” The 30 year anniversary of the ADA is this year. Any chance of working that into the script? How many families struggled with COVID and lost a loved one. You have a rare opportunity this season. Our Nation will mourn with you if you handle this with grace and insight. Please help us be uplifted and… Read more »

I am so excited there is another season to look forward to! I could bust!
What a refreshing new show… line nothing ever before.
The writers and musical directors are brilliant.
The ultimate entertainment escape .
Just sad to see Peter die in the first season.
Love love love this show .

Yay!!! I am ecstatic that this show is returning. It is so creative. I can’t get enough of the awesome acting, dancing and singing this show brings.

I am so happy that Zoey is going to have a season2 and more I hope. I absolutely love the show. Their is no show like it. Let the music begin!

I absolutely love love love this show! I look forward to watching every week and we i Miss I go back and catch up. It’s so catchy and uplifting. Exactly what we all need at a time such as this. Thank you!

Love this show. Hope Peter G. will do “ghost” scenes & sing. Please limit singing by Mary S. She’s a great actress but song is not her strong suit. And maybe make her brother a tad less anxious & angst ridden. The office crew has stronger story potential than her sib & his wife.

I can’t wait until Zoey s extraordinary playlist season 2 comes back on. It’s going to be extraordinary. I totally love this show.

I can’t wait until Zoey s extraordinary playlist season 2 comes on. It’s going to be extraordinary. Love this show a lot

Yes I am excited for the series return. The empathy she felt for others by having this gift was heartwarming. The choice of songs have been right on. I love the show
.

Tried to get into this. Didn’t hold me enough probably because of my timing, not seeing enough back to back episodes or just tuning in part way in. I probably should lighten up some but the in/out nature of the show “dramaedy” (wth is that) doesn’t feed soul right now. Need straight out fun or serious. Light or dark, not the wishy washy. yrmv

Please renew, it was awesome focused on Alzhimers, well done! We all have sorted lives Zooey made us forget or that we were okay. The music is amazing off the chain! Love thanks! And just so you know, I was not interested in Zoeys Series, I watched one episode I was hooked!

I love Zoey and all the characters you mentioned. CAN’T WAIT!