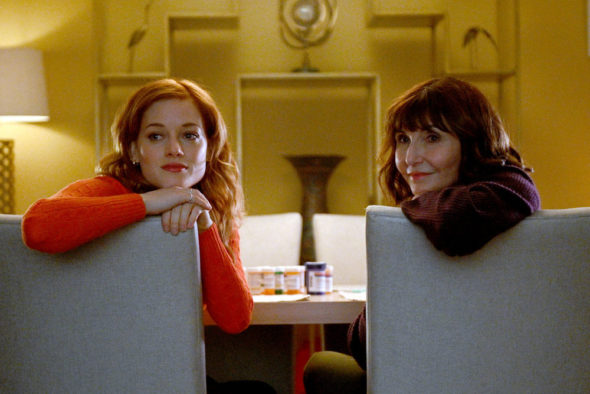 The cast of Zoey’s Extraordinary Playlist is headed back to work today. The series films in Vancouver and it was revealed by Ted Danson that the cast was filming on Monday at an interview during the Emmy Awards. He is married to Mary Steenburgen, who stars on the series, and joked that his wife had to go to bed early because she would be filming the next day.

Deadline revealed the following about the plot of the musical dramedy:

“Zoey’s Extraordinary Playlist stars Jane Levy as Zoey Clarke, a whip-smart computer coder forging her way in San Francisco. After an unusual event, Zoey, who always preferred podcasts over pop songs, suddenly starts to hear the innermost wants, thoughts and desires of the people around her – her family, co-workers and complete strangers – through popular songs. At first, she questions her own sanity, but after getting some guidance from her musically adept neighbor, Mo (Alex Newell), and making a breakthrough with her ailing father (Peter Gallagher), Zoey soon realizes this unwanted curse might just be an incredibly wonderful gift as she connects with the world like never before.”

A second season premiere date for the NBC series has not been set, but it is expected to begin airing sometime during the 2020-21 broadcast season.

What do you think? Are you a fan of the Zoey’s Extraordinary Playlist TV show on NBC? Will you watch season two when it arrives?

Please renew! The show is awesome.

I LOVE this show. My husband and I watched it regularly and we’re happy to see it wasn’t canceled!

I love this show. Each episode was memorable and the ending of season one was especially moving. Just delightful and I look forward to another season. SOON!

I love this show, in these times we need a show that makes us smile and laugh. I hope it stays on for a very long time.

I adore this program and all of the characters!! The playlists are incredibly sung and choreographed!! One of the best tv shows ever!! I am so looking forward to the next season.

Love love love the show. What a great idea whoever thought up this show is a genius!!

You bet, I fell in love with this show.

I like it, but I don’t know how good it’ll be without Peter Gallagher, he was the main reason I watched

I love this show and can’t wait to start watching season 2!

This is such a great show, well written, choreographed and music choices are well thought out and performed by talented actors. Can’t wait to see what happens in season two.

I watched the pilot episode of Zoey’s Extraordinary Playlist when it premiered last sesson, not thinking I would like it. But it surprised me, and I watched all the episodes in the season. I am looking forward for it to return for season 2.