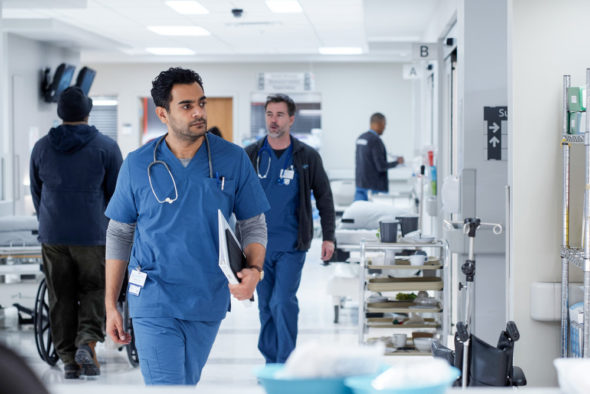 Will this Canadian series continue to have a home in the United States? Has the Transplant TV show been cancelled or renewed for a third season on NBC? The television vulture is watching all the latest cancellation and renewal news, so this page is the place to track the status of Transplant, season three. Bookmark it, or subscribe for the latest updates. Remember, the television vulture is watching your shows. Are you?

Airing on the NBC television network, the Transplant TV show originates in Canada and stars Hamza Haq, Laurence Leboeuf, John Hannah, Jim Watson, Ayisha Issa, Linda E. Smith, Torri Higginson, Gord Rand, Nora Guerch, and Ahmad Meree. Doctor Bashir Hamed (Haq) is a charismatic Syrian doctor with battle-tested skills in emergency medicine. He and his younger sister, Amira (Gulamgaus), flee their war-torn homeland and become refugees, struggling to forge a new life in Canada. When a horrific truck crash nearly kills a senior doctor right in front of him, Bash saves the doctor’s life and earns a residency in the biggest Emergency Department of the best hospital in Toronto. Bash tries to meet the demands of his new country and a new job, while trying to pay the bills, raise his little sister and carve out a new life for them both in this unfamiliar land. In season two, boss Dr. Jed Bishop (Hannah) has suffered a stroke and Bash and his team must adjust to both new colleagues and new challenges.

The second season of Transplant averages a 0.16 rating in the 18-49 demographic and 1.18 million viewers in the live+same day ratings (includes all DVR playback through 3:00 AM). Compared to season one, that’s down by 64% in the demo and down by 66% in viewership. While these numbers don’t include further delayed or streaming viewing, they are a very good indicator of how a show is performing, especially when compared to others on the same channel. Though other economic factors are involved, the higher-rated shows usually get renewed and the lower-rated ones get cancelled. Find out how Transplant stacks up against other NBC TV shows.

Will NBC cancel or renew Transplant? The medical drama originates in Canada where it’s already been renewed for season three. It costs less for the peacock network to license this show than to produce an original series. So, I suspect Transplant will continue airing on NBC but it will likely air during the summer months next time around. I’ll update this page with breaking developments. Subscribe for free alerts on Transplant cancellation or renewal news.

What do you think? Do you hope that season three of the Transplant TV show will air on NBC? How would you feel if the network cancelled this Canadian TV series, instead?

Why ratings dropped ? No advertisements. You have advertisements 3 and 4 times a day for the show “this is us” But only twice have a seen any ad for transplant coming on. . This is BIAS., You are looking for an excuse to cancel it. Bring it back

Love this show! It’s a good one so figured it would get canceled. So glad it didn’t get the ax.

I LOVE this show – the writing, the characters, the acting… it is not just gripping, it addresses an important situation in NA: highly trained newcomers trying to build a new life, and the challenges they face in the professional world. The show has unusual depth. I really REALLY hope it continues! I record every episode.

I really like the series Transplant I would rate it right up there with Chicago Med and New amsterdam. Sure hope NBC brings it back

What did they think was going to happen to the viewership? As I recall, it was off for almost two entire seasons!

We LOVE Transplant !! It’s a great story line, the actors seem to fit the parts beautifully, and it’s refreshing to see new faces on tv. Season 2’s first episode was on a night that had multiple shows coming back on after a long break. NNC should have had a binge watch day a week before, to remind viewers what they have been missing. Transplant is the best new Drama on TV !!

I totally agree with you that they should have at least shown the season finale. It has been so long since this show has been on that I thought it got cancelled and I also forgot where the show left on. That was a big mistake. I do hope that the show gets renewed, it is one of my favorites.

I like the show. Didn’t know ir started but I have it on my auto dvr to record. Sunday is an awful tv night. I wTch Rookie, Swat which I love. Atleast now transplant is on.
ALL THE DECENT SHOWS GET CANCELLED.. GIVE IT A CHANCE. So many ridiculous shows on that shouldn’t be.

Totally agree with you! So many stupid shows getting renewed like all the cartoon shows.. Transplant was off due the pandemic. They have to give it a chance for people to reconnect!! I love the show!

Transplant is one of the more quality shows on TV right now. It is one of our favorite shows and we so look forward to it each week. Please keep Transplant!