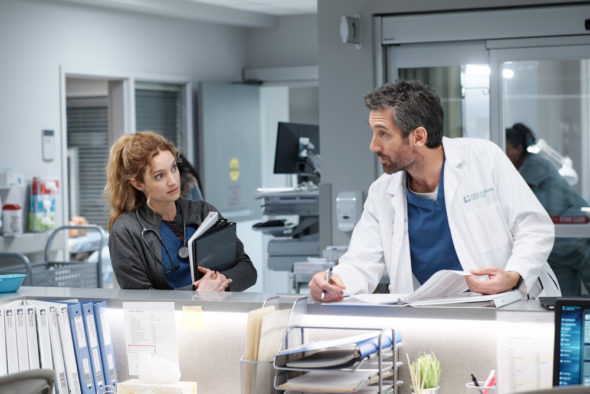 Will Bash’s life get any easier in the second season of the Transplant TV show on NBC? As we all know, the Nielsen ratings typically play a big role in determining whether a TV show like Transplant is cancelled or renewed (in this case, the show’s already been renewed for season three in Canada). Unfortunately, most of us do not live in Nielsen households. Because many viewers feel frustrated when their viewing habits and opinions aren’t considered, we invite you to rate all of the second season episodes of Transplant here.

A Canadian medical drama series that airs on NBC, the Transplant TV show stars Hamza Haq, Laurence Leboeuf, John Hannah, Jim Watson, Ayisha Issa, Linda E. Smith, Torri Higginson, Gord Rand, Nora Guerch, and Ahmad Meree. Doctor Bashir Hamed (Haq) is a charismatic Syrian doctor with battle-tested skills in emergency medicine. He and his younger sister, Amira (Gulamgaus), flee their war-torn homeland and become refugees, struggling to forge a new life in Canada. When a horrific truck crash nearly kills a senior doctor right in front of him, Bash saves the doctor’s life and earns a residency in the biggest Emergency Department of the best hospital in Toronto. Bash tries to meet the demands of his new country and a new job, while trying to pay the bills, raise his little sister and carve out a new life for them both in this unfamiliar land. In season two, boss Dr. Jed Bishop (Hannah) has suffered a stroke and Bash and his team must adjust to both new colleagues and new challenges.

What do you think? Which season two episodes of the Transplant TV series do you rate as wonderful, terrible, or somewhere between? Do you think that Transplant should be picked up for a third season on NBC? Don’t forget to vote, and share your thoughts, below.

NBC didn’t even advertise season 2.
I didn’t even know a new season started until I seen it on my DVR.
Now no new episode in 3 weeks. No advertisement as to when the next episode will be shown.

It seems like NBC really don’t care about this show.

Transplant is an excellent series on NBC. I love watching it. Please continue with season 3.

They moved it to Sunday, so sometimes that means that they might cancel it.
So far the first 2 episodes seemed boring.

We love transplant,it teaches you and you really learn about the different religions. I catch myself
now,before I say something rudeI am no better than anyone else. Keep
TRANSPLANT ALIVE!!

I am very glad Transplant is back, I love it.

However, I feel it will have trouble attracting new viewers because NBC chose to not give it any publicity or delve into the first season so new viewers would understand the story.
Also, NBC only picked up Transplant to fill voids left in their schedule by Covid. I don’t think they thought it would be so popular.

In the TV Guide there was only one paragraph at the bottom of Sunday nights best bets that it was even on.

I absolutely adore this show, especially because: it has a cast of characters with backgrounds very different from the usual medical show; its from Canada! – also different for us Yanks; and the story lines are engaging. I read hope that Season 3 is shown here. I would watch it.

So glad this series is back. We’d also like to see a second season of Nurses.

I really enjoy this show. With the amount of time between the first season and this one, I thought I might not be able to get back into it so quickly, but I immediately fell back in love with the show and characters.