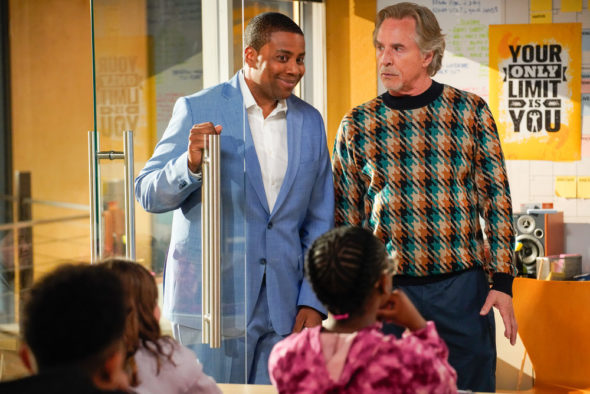 It looks like Kenan Thompson won’t need to do double duty on NBC any longer. The longtime Saturday Night Live performer’s sitcom, Kenan, has been cancelled so we won’t see a third season on the peacock network. The second season of 10 episodes finished airing in late January.

A single-camera comedy series, the Kenan TV show stars Thompson, Chris Redd, Kimrie Lewis, Dani Lane, Dannah Lane, Taylor Louderman, and Don Johnson. In the story, Kenan Williams (Thompson) is trying to reclaim his life following his wife’s death. Kenan’s two daughters are his world – the very intelligent Aubrey (Dani Lane) and the silly and unpredictable Birdie (Dannah Lane). He struggles to parent them as a single dad and host his Atlanta-based talk show. This leads Kenan to reluctantly accept help from his father-in-law, Rick (Johnson), but their parenting styles aren’t exactly a match. At work, Kenan excels at his job — with the help of his driven executive producer, Mika (Lewis). Mika can be tightly wound, especially when Gary (Redd), Kenan’s brother and not-so-professional manager, tries to insert himself.

Airing on Monday nights, the second season of Kenan averaged a 0.31 rating in the 18-49 demographic and 1.80 million viewers in the live+same day ratings. Compared to season one, that’s down by 34% in the demo and down by 26% in viewership in the live+same day ratings (including DVR playback through 3:00 AM). It’s a lower-tiered performer for the network in the traditional ratings. In the live+7 day ratings, the show averaged a 0.40 demo and 2.15 million, gaining 29% and 20% in delayed viewing.

What do you think? Have you enjoyed watching the Kenan TV show on NBC? Are you sad to hear that this comedy wasn’t renewed for a third season?

Really unfair…. this was a good funny show

Here we go again NBC! There was a fantastic funny show and just shot it down! I looked forward to watching comedian Kenan Thompson, the fabulous Don Johnson and the rest of the cast of the show. They were all so funny and talented. Each episode had a good and different story meaning. I am really going miss them!

The right decision. It just lacked any real humour and Don Johnson deserves better than this.

You Took The Words Right Out Of My Mouth