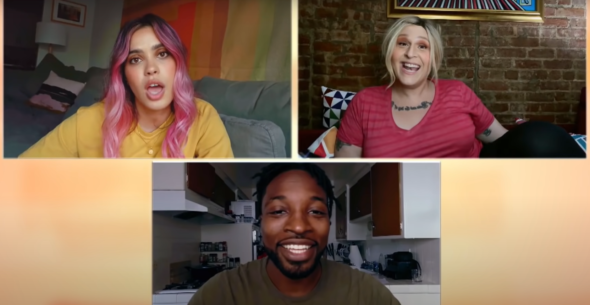 Will audiences connect with these social-distanced friends? Has the Connecting… TV show been cancelled or renewed for a second season on NBC? The television vulture is watching all the latest cancellation and renewal news, so this page is the place to track the status of Connecting…, season two. Bookmark it, or subscribe for the latest updates. Remember, the television vulture is watching your shows. Are you?

Airing on the NBC television network, the Connecting… TV show stars Ely Henry, Jill Knox, Keith Powell, Otmara Marrero, Parvesh Cheena, Preacher Lawson, and Shakina Nayfack. It is an ensemble sitcom about a group of friends. Like all of us, they are trying to stay close (and sane) through video chats as they share the highs and lows of lockdown and these extraordinary times. The friends are Rufus (Henry), Michelle (Knox), Garrett (Powell), Annie (Marrero), Pradeep (Cheena), Ben (Lawson), and Ellis (Nayfack). Shot remotely, the sitcom is co-created and co-executive produced by Martin Gero and Brendan Gall.

The first season of Connecting… averaged a 0.33 rating in the 18-49 demographic and 1.51 million viewers. Only four episodes aired on NBC before the show was pulled. Find out how Connecting… stacks up against other NBC TV shows.

Will NBC cancel or renew Connecting… for season two? The pandemic threw the television industry for a loop and the networks had to scramble to find a way to produce new content. This series, which was ordered in June 2020, was an early reaction. Unfortunately, I don’t think many people want to watch a show about friends making Zoom calls during the pandemic, nevermind once it’s over. I don’t see this series getting a second season. I’ll update this page with breaking developments. Subscribe for free alerts on Connecting… cancellation or renewal news.

What do you think? Were you hoping the Connecting… TV show would be renewed for a second season? How do you feel that NBC cancelled this TV series, instead?

The show is smart and funny, not the usual banal sitcom. The characters are engaging, and the writing reflects the reality of our time. I hope NBC gives it a chance with a full season!

It is the most boring show I have ever seen. The show consists of people video chatting with each other. I am glad it was cancelled after only 4 episodes.

The show is smart, funny and at the same time an honest observation of what we are all going through. The characters are so relatable. I hope it gets another season!

I watched the pilot show and I was very disappointed. It was the dullest show I have ever seen. It is truly terrible. After 10 minutes I couldn’t take it anymore and I switched channels.