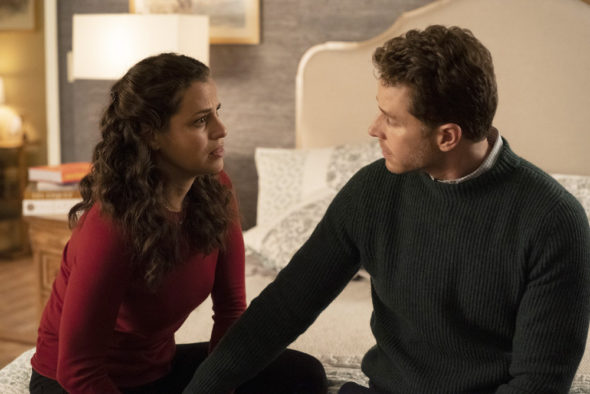 Is there turbulence ahead? Has the Manifest TV show been cancelled or renewed for a third season on NBC? The television vulture is watching all the latest cancellation and renewal news, so this page is the place to track the status of Manifest, season three. Bookmark it, or subscribe for the latest updates. Remember, the television vulture is watching your shows. Are you?

Airing on the NBC television network, Manifest stars Melissa Roxburgh, Josh Dallas, Athena Karkanis, J.R. Ramirez, Luna Blaise, Jack Messina, Parveen Kaur, and Matt Long. After a turbulent but routine flight, the crew and passengers of Flight 828 disembarked to find the world had aged more than five years. Their friends, families, and colleagues had given up hope of ever seeing them again. Now, faced with the impossible, the passengers’ dreams of a second chance at life evaporate as they encounter imminent dangers surrounding them, both tangible and unexplained.

The second season of Manifest averaged a 0.68 rating in the 18-49 demographic and 3.89 million viewers. Compared to season one, that’s down by 45% in the demo and down by 40% in viewership. Find out how Manifest stacks up against other NBC TV shows.

Will NBC cancel or renew Manifest for season three? The series was on the bubble last year and NBC renewed it but held it until mid-season and ordered fewer episodes. My sense is that the network wants it to succeed but it’s got an uphill battle, ratings-wise. This series will likely be cancelled but my sense is that it will get renewed by the skin of its teeth. I’ll update this page with breaking developments. Subscribe for free alerts on Manifest cancellation or renewal news.

6/16/20 update: Manifest has been renewed for a third season on NBC.

What do you think? Are you glad that the Manifest TV show has been renewed for a third season? How would you feel if NBC had cancelled this TV series, instead?

Glad it is renewed for season 3. I do think however, it should probably have a finale season. The way season 2 had ended…boaters finding a tail of their plane, so are these people actually walking dead…or are they among the survivors that the government keep close tabs on for whatever reason. Good show.

I am so so happy that Manifest is coming back!! I love it so much!!!