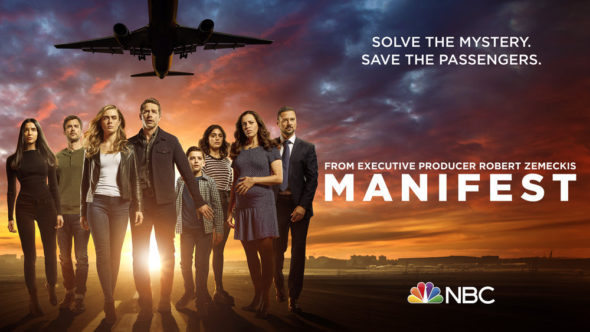 After a very strong premiere, the first season ratings for Manifest saw a steep decline. NBC could have easily cancelled the show but it was renewed for a second season (albeit a shorter one). Will the ratings improve in season two or, will they continue to fall? Will Manifest be cancelled or renewed for season three? Stay tuned. *Status update below.

A supernatural drama, Manifest stars Melissa Roxburgh, Josh Dallas, Athena Karkanis, J.R. Ramirez, Luna Blaise, Jack Messina, Parveen Kaur, and Matt Long. After a turbulent but routine flight, the crew and passengers of Flight 828 disembarked to find the world had aged more than five years. Their friends, families, and colleagues had given up hope of ever seeing them again. Now, faced with the impossible, the passengers’ dreams of a second chance at life evaporate as they encounter imminent dangers surrounding them, both tangible and unexplained.

4/7 update: You can see the latest night’s ratings in context.

Note: If you’re not seeing the updated chart, please try reloading the page or view it here.
For comparisons: Season one of Manifest on NBC averaged a 1.25 rating in the 18-49 demographic and 6.48 million viewers.
Note: These are the final national numbers (unless noted with an “*”). These are different from the fast affiliate numbers which are just estimates of the actual ratings. The final nationals are typically released within 24 hours of the programming or, in the case of weekends and holidays, a couple days later.
D

What do you think? Do you like the Manifest TV series on NBC? Should it be cancelled or renewed for a third season?

I have stuck to the screen for seasons 1 and 2 of manifest, I really hope there will be a season 3 as I think there are many more story lines that can be told. From the UK, bring it back.