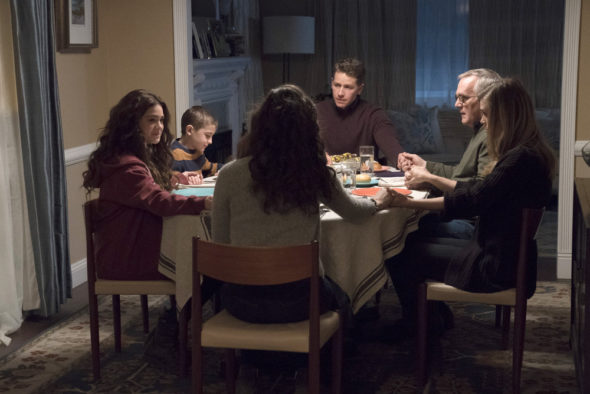 Love this show bring it back! I’ve watched so many good TV shows that have been canceled and I don’t understand why! And then they are replaced with stupid sit coms that aren’t even funny! Guess that’s why I love Netflix so much!

I love this show so much! It was my favorite new show of last fall!! I was extremely disappointed to find out we were only getting 13 episodes for Season 2 & the show wasn’t coming on until Jan 2020. That is so unfair. I cannot wait for the show to come back on.

I see some think Manifest is cancelled but it’s not. It’s returning for a second season. I really enjoy the drama. I’m looking forward to seeing the second season of Manifest.

None of the above should be Samantha.

Enjoyed manifest, the relationships and the suspense. Disappointed the show didn’t continue into a second season.

The show is coming back in Jan for Season 2

Absolutely love this show. I love that it keeps me on the edge of my seat and then you hold off again until another week. My whole family sits together and watches this show. I’d be devastated if it cancelled.

The show will be back in Jan.

Really like this show! Story line is different from the shows currently on TV. Just hoping it doesn’t get hokey like another show that started off good & then went bad. (Lost)

This is a good show. I can’t see this being cancelled or not being renewed. Sometimes their in a time slot with another extremely watched show so move them to another time or day. In my opinion, Saturday night is horrible viewing. It needs better shows to watch.

Crushed if you cancel! This show is different and that is a good change from so many reality shows, medical, police. etc.

I found this series to be more than entertaining. It is complete unique in the premise. The actors are all believable and I always look forward to the next episode. I will be greatly disappointed if NBC were to cancel it. I very seldom watch programs from NBC, CBS, or ABC. NBC has surprised me with FINALLY producing something that the whole family can watch.

The show has been unique and very entertaining. If the network is smart they would continue it.

I could not agree more.