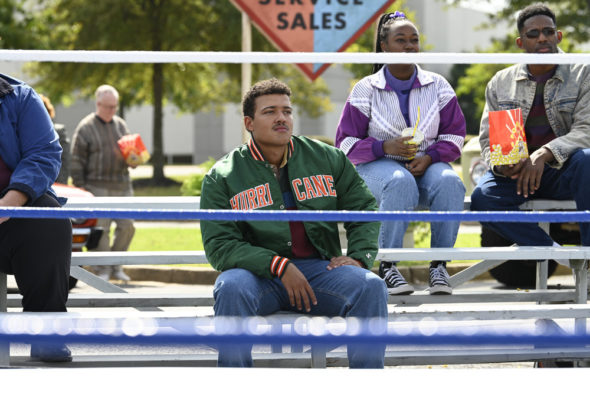 New twists and turns are ahead for young Dwayne. Has the Young RockTV show been cancelled or renewed for a fourth season on NBC? The television vulture is watching all the latest cancellation and renewal news, so this page is the place to track the status of Young Rock, season four. Bookmark it, or subscribe for the latest updates. Remember, the television vulture is watching your shows. Are you?

A coming-of-age comedy series airing on the NBC television network, the Young Rock stars Dwayne Johnson, Joseph Lee Anderson, Stacey Leilua, Adrian Groulx, Bradley Constant, Uli Latukefu, Ana Tuisila, Fasitua Amosa, and John Tui. The TV show is based on the life of Johnson, a professional wrestle and actor. In addition to the real Johnson talking about his lifetime of memories from the year 2032, stories are told through his experiences at three different points. At age 10, Dwayne (Groulx), aka Dewey, is honest, headstrong, impressionable, and bold. At age 15, Dwayne (Constant) is doing his best to fit in like a normal teenager, but puberty has other ideas. His size and full mustache have his classmates convinced he’s an undercover cop. Then, at age 18-20, Johnson (Latukefu) has just been recruited to play football on a full scholarship at the powerhouse University of Miami. Though he has amazing physical abilities, a devastating injury during his freshman year puts his life at a crossroads.

The third season of Young Rock averages a 0.25 rating in the 18-49 demographic and 1.53 million viewers in the live+same day ratings (includes all DVR playback through 3:00 AM). Compared to season two, that’s down by 35% in the demo and down by 31% in viewership. While these numbers don’t include further delayed or streaming viewing, they are a very good indicator of how a show is performing, especially when compared to others on the same channel. There can be other economic factors involved in a show’s fate, but the higher-rated series are usually renewed and the lower-rated ones are cancelled. Find out how Young Rock stacks up against other NBC TV shows.

Will NBC cancel or renew Young Rock for season four? The network doesn’t have many comedy series, and having The Rock on a show looks good for the schedule, even if a large audience doesn’t watch. I think there’s a good chance that Young Rock will be renewed for a fourth year. I’ll update this page with breaking developments. Subscribe for free alerts on Young Rock cancellation or renewal news.

What do you think? Do you hope that the Young RockTV show will be renewed for a fourth season? How would you feel if NBC cancelled this TV series, instead?