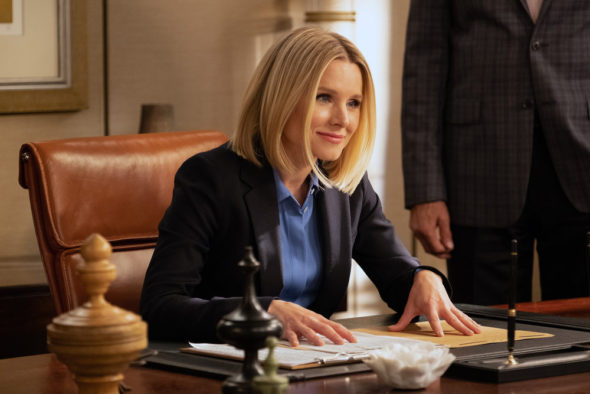 Will this show have a heavenly ending? Has The Good Place TV show been cancelled or renewed for a fifth season on NBC? The television vulture is watching all the latest cancellation and renewal news, so this page is the place to track the status of The Good Place, season five. Bookmark it, or subscribe for the latest updates. Remember, the television vulture is watching your shows. Are you?

Airing on the NBC television network, The Good Place stars Ted Danson, Kristen Bell, William Jackson Harper, Jameela Jamil, Manny Jacinto, and D’Arcy Carden. The series centers on Eleanor Shellstrop (Bell) who, after dying, mistakenly ends up in The Good Place — instead of The Bad Place — where she truly belongs. She is introduced by Michael (Ted Danson), the designer of the Heaven-like utopia and he is assisted by Janet (Carden), an artificial being. Along with fellow lost souls, indecisive philosopher Chidi Anagonye (Harper), shallow socialite Tahani Al-Jamil (Jamil), and blundering Blake Bortles super-fan, Jason Mendoza (Jacinto), Eleanor tries to find the good person within. As the fourth season begins, we find Eleanor assuming the role of the architect.

The fourth season of The Good Place averages a 0.61 rating in the 18-49 demographic and 2.09 million viewers. Compared to season three, that’s down by 28% and 24%, respectively. Find out how The Good Place stacks up against other NBC TV shows.

We don’t have to wonder if The Good Place will be renewed for a fifth season. NBC has already announced season four is the end. I’ll update this page with breaking developments. Subscribe for free alerts on The Good Place cancellation or renewal news.

What do you think? Do you hope The Good Place TV show will be renewed for a fifth season? How would you feel if NBC cancelled this TV series, instead?

Please let there be a fifth season! If it ends there it’ll be horrible! I will be questioning for like the rest of my life! Lol

I hope that there will be a season 5 love the show!!!!