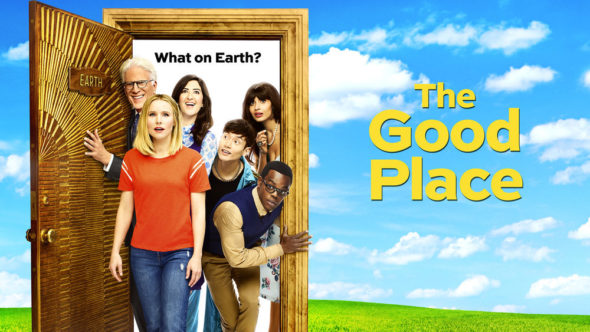 Last year, while The Good Place TV show dropped some in the Nielsen ratings and slipped from its heavenly perch as a top-five scripted NBC TV series, it managed to remain in the top-10. Can the afterlife comedy regain some of its audience in the third season, or will it continue its downward slide to cancellation Hell? Will The Good Place be cancelled or renewed for season four? Stay tuned. **Status update below.

After pleading their case to the Judge (Maya Rudolph) in the season two finale, the gang is given a second shot a living a good life. Season three finds them back on Earth. Separated and retaining no memory of one another their task seems insurmountable until they get a little help from Good Place architect Michael (Danson) who, along with not-a-robot Janet (Carden), is watching over them from afar.

For comparisons: The second season of The Good Place on NBC averaged a 1.14 rating in the 18-49 year old viewer demographic and a total audience of 3.879 million viewers (live + same day ratings).

What do you think? Do you like The Good Place TV series? Should it have been cancelled or renewed for a fourth season on NBC?

I love the show! There is so much depth in the writing that it’s one of the few shows worth repeated viewings. A great mix of thoughtfulness and humor!