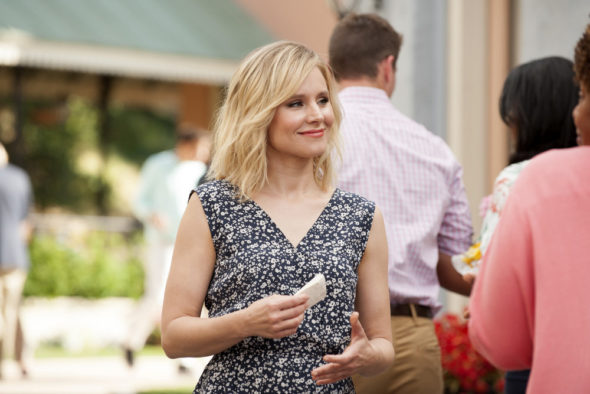 Do Eleanor’s good deeds outweigh the bad in season two of The Good Place TV show on NBC? As we all know, the Nielsen ratings typically play a big role in determining whether a TV show like The Good Place is cancelled or renewed for a third season. Unfortunately, most of us do not live in Nielsen households. Because many viewers feel frustration, when their viewing habits and opinions aren’t considered, we’d like to offer you the chance to rate all the season two episodes of The Good Place for us here.

An NBC sitcom, The Good Place stars Ted Danson, Kristen Bell, William Jackson Harper, Jameela Jamil, Manny Jacinto, and D’Arcy Carden. The sitcom centers on the thoughtless Eleanor Shellstrop (Bell). After death, Eleanor mistakenly ends up in The Good Place — instead of The Bad Place, where she arguably belongs. With the help of her soulmate, Chidi (Harper), she tries to find her inner goodness (or at least decency). Meanwhile, they must keep her secret from Good Place architect Michael (Danson). In season two, everything is up in the air, after the events of the first season’s “world-upending” finale.

What do you think? Which season two episodes of The Good Place TV series do you rate as wonderful, terrible, or somewhere between? Should NBC cancel or renew The Good Place  for a third season? Don’t forget to vote, and share your thoughts, below.

Other than The Simpsons, The Good Place is the first prime-time comedy I’ve watched since the first couple of seasons of Friends. I didn’t think that network TV could be fun anymore. Very happy to learn otherwise.

I love this show. One of the few comedies I watch. I didn’t catch it when it first came on, but I did view all the episodes. I hope it will continue. But since it has references to God, will Godless studios want to kill it?

Yes yes yes please renew this series it was so funny I loved it and I would love to see it come back it’s worth it to me!

I love this show. I saw the first episode and immediately binge-watched the rest of the season that day. I’ve rewatched it all I don’t know how many times since. I’ve NEVER done this before. Why do I love it? 1) it’s creative: it’s not your usual family/friends sitcom with the same old stagnant stale jokes and plots: someone in television has finally had an original idea and NBC has been smart enough to realise it, 2) unexpected plot twists: add another level of Interest and enjoyment to the viewing experience, watching and trying to foresee the next one, 3)… Read more »

And 4) the stellar acting!