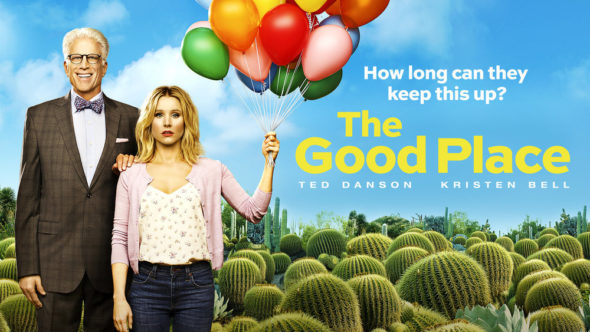 The first season of The Good Place TV show on NBC was a top-five TV series in terms of its 18-49 demo ratings and a top ten show where total audience size is concerned. In the second season, can this comedy continue to deliver more Heaven-sent numbers for the Peacock Network? Will The Good Place be cancelled or renewed for season three? Stay tuned.

An NBC sitcom, The Good Place stars Ted Danson, Kristen Bell, William Jackson Harper, Jameela Jamil, Manny Jacinto, and D’Arcy Carden. The series centers on the thoughtless Eleanor Shellstrop (Bell). After death, Eleanor mistakenly ends up in The Good Place — instead of The Bad Place — where she truly belongs. With the help of her soulmate, Chidi (William Jackson Harper), she tries to find the good (or at least decent) person within. Meanwhile, they must keep her secret from Good Place architect Michael (Ted Danson). In season two, everything is up in the air, after the events of the first season’s “world-upending” finale.

For comparisons: The first season of The Good Place on NBC averaged a 1.35 rating in the 18-49 year old viewer demographic and a total audience of 4.72 million viewers (live + same day ratings).

What do you think? Do you like The Good Place TV series? Should it be cancelled or renewed for a third season on NBC?

11/21 update: The Good Place has been renewed for season three on NBC. Details here.

where did the writers for season 1 go? This season isn’t very good.

It was just renewed for another season. I don’t know what the +3 and +7 ratings are. A 1.2 isn’t impressive, but it is a lot better than a lot of other shows out there.

I hope it comes back for another season. I’m enjoying it a lot.

Fantastic show, funny and smart and gets better and better!

This is a good show. Sad to see it loosing It’s audience

It’s not losing too many viewers.

4 episodes have aired so far. I’m not sure what your sources are but, you’re wrong.

You’re confused. NBC changed the premiere date from September 28th to September 20th and it had an hour-long premiere.

This is a half hour show

4 episodes were shown in 3 weeks