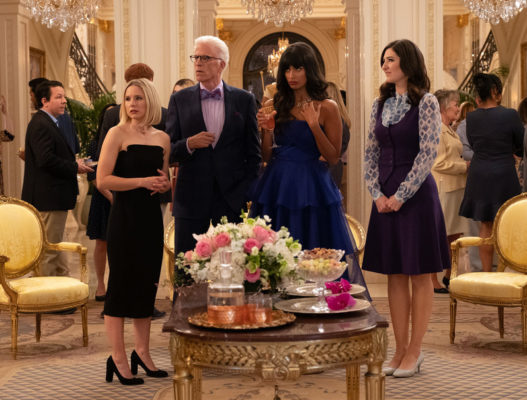 Will there be truly happy endings in the fourth (and final) season of The Good Place TV show on NBC? As we all know, the Nielsen ratings typically play a big role in determining whether a TV show like The Good Place is cancelled or renewed. Unfortunately, most of us do not live in Nielsen households and weren’t consulted when the decision was made to end the show. Because many viewers feel frustration when their viewing habits and opinions aren’t considered, we invite you to rate all of the fourth season episodes of The Good Place here.

An NBC single-camera comedy series, The Good Place stars Ted Danson, Kristen Bell, William Jackson Harper, Jameela Jamil, Manny Jacinto, and D’Arcy Carden. The series centers on Eleanor Shellstrop (Bell) who, after dying, mistakenly ends up in The Good Place — instead of The Bad Place — where she truly belongs. She is introduced by Michael (Ted Danson), the designer of the Heaven-like utopia and he is assisted by Janet (Carden), an artificial being. Along with fellow lost souls, indecisive philosopher Chidi Anagonye (Harper), shallow socialite Tahani Al-Jamil (Jamil), and blundering Blake Bortles super-fan, Jason Mendoza (Jacinto), Eleanor tries to find the good person within. As the fourth season begins, we find Eleanor assuming the role of the architect.

What do you think? Which season four episodes of The Good Place TV series do you rate as wonderful, terrible, or somewhere between? Do you think that The Good Place should have been renewed for a fifth season? Don’t forget to vote, and share your thoughts, below.

I think The Good Place should have been renewed. I love the program and all the actors. They all fit. It is a fun series. Really going to miss it.