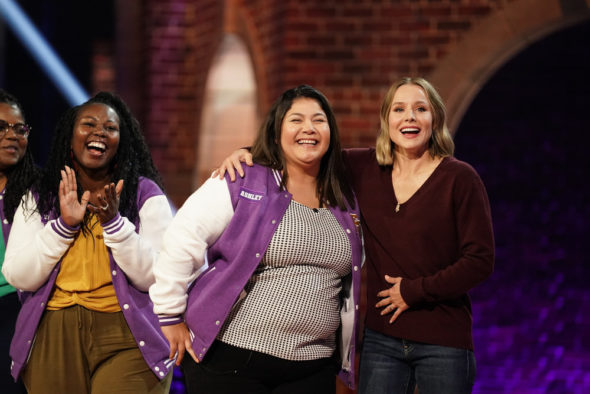 An NBC competition series, Family Game Fight! was inspired by Kristen Bell and Dax Shepard’s antics on The Ellen DeGeneres Show. The show pits the husband and wife against one another as they are “adopted” into a family of four (actual family members or groups of friends) competing in a series of fun-filled and larger-than-life games. They include “Between the Sheets,” “Pie Rollers,” “Sound Bites,” “Taste Buds,” “Air Heads,” “Nosy Neighbors,” “Deep Dish Dash,” and “Brain Freeze.” The winning family then plays a bonus game called “Spin Cycle”. On a revolving platform, Bell and Shepard describe different words in various ways for the family members to guess. Each correct answer is worth $10,000 and the family can win up to $100,000.

Love this show. Definitely needs to be renewed. Dax and Kristin are the perfect hosts and game players

I’m going to have to agree with mjp

The hosts are nice, but…. I really think it would be 10x better if the hosts actually let the families do the game and they just hosted