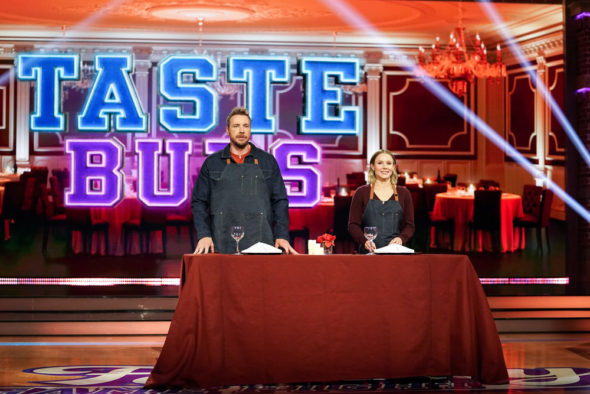 Is this show a winner? Has the Family Game Fight! TV show been cancelled or renewed for a second season on NBC? The television vulture is watching all the latest cancellation and renewal news, so this page is the place to track the status of Family Game Fight!, season two. Bookmark it, or subscribe for the latest updates. Remember, the television vulture is watching your shows. Are you?

Airing on the NBC television network, Family Game Fight! was inspired by Kristen Bell and Dax Shepard’s antics on The Ellen DeGeneres Show. The show pits the husband and wife against one another as they are “adopted” into a family of four (actual family members or groups of friends) competing in a series of fun-filled and larger-than-life games. They include “Between the Sheets,” “Pie Rollers,” “Sound Bites,” “Taste Buds,” “Air Heads,” “Nosy Neighbors,” “Deep Dish Dash,” and “Brain Freeze.” The winning family then plays a bonus game called “Spin Cycle”. On a revolving platform, Bell and Shepard describe different words in various ways for the family members to guess. Each correct answer is worth $10,000 and the family can win up to $100,000.

The first season of Family Game Fight! averages a 0.47 rating in the 18-49 demographic and 2.42 million viewers in the live+same day ratings (including DVR playback through 3:00 AM). While these numbers don’t include further delayed or streaming viewing, they are a very good indicator of how a show is performing, especially when compared to others on the same channel. There can be other economic factors involved in a show’s fate, but typically the higher-rated series are renewed and the lower-rated ones are cancelled. Find out how Family Game Fight! stacks up against other NBC TV shows.

Will NBC cancel or renew Family Game Fight! for season two? The series got a positive start because of the Olympics but we’ll have to wait and see how later episodes perform. I’ll update this page with breaking developments. Subscribe for free alerts on Family Game Fight! cancellation or renewal news.

What do you think? Do you hope that the Family Game Fight! TV show will be renewed for a second season? How would you feel if NBC cancelled this TV series, instead?